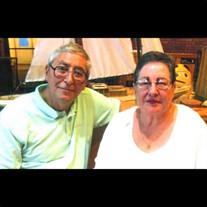 A Celebration of Life Service for Ken Chromy was held at 11:00 a.m. on Friday, October 30, 2020 at Farmer & Son Funeral Home in Geneva. Kim Dunker officiated the Memorial Service. Ken’s ashes will be interred at a later date in the Bohemian National Cemetery in Milligan, Nebraska. Memorials are suggested to the family. Memorials are suggested to the family. Kenneth George Chromy was born to Joseph F. & Alice A. (Nesladek) Chromy at Iva Liles Nursing Home in North Bend, Nebraska on February 19, 1947. He passed away at Heritage Crossings Nursing Home in Geneva, Nebraska on Thursday, March 26, 2020 after a courageous battle with cancer at the age of 73 years, 1 month and 7 days. Ken was baptized and confirmed at St. Charles Catholic Church in North Bend, Nebraska. Ken grew up on two different farms north of North Bend. He did field work and milked cows. Ken attended country school at District 13. He later attended North Bend High School graduating with the class of 1965. He lettered in football and won many medals in track. Ken was a member of the National Honor Society and received many honors for his achievements in math. Ken attended the University of Nebraska in Lincoln for 2.5 years. He volunteered for the Army but was deferred due to high blood pressure. Ken married Linda Halm on October 4, 1969 and they later divorced. They had two children: Jeffrey & Michelle. Ken later married Kathryn Bernasek who was originally from Ohiowa, Nebraska, on June 13, 1981 at the United Methodist Church in Geneva, Nebraska. They made their home in Lincoln. In 1968, Ken started working for Gooch Feed Mill in Lincoln, Nebraska. He worked in the Feed Division for 23 years. Gooch later changed to ADM Feeds & Ag Processing. His work included salesman, production manager, foreman, and plant manager. As a salesman, he worked on the road living in Humboldt and then later Syracuse. When Ken got tired of traveling, he took the position of plant manager in the Pet Foods Division. He retired in December of 1992. Wanting a slower pace, In the winter of 1992, Ken & Kathy moved to Kathy’s family farm northwest of Ohiowa that she inherited from her parents. For several years they bought and sold collectibles. In 1994, Ken worked for a soil amendment company selling soil conditioners to farmers in Nebraska, Oklahoma, Colorado, and Kansas. This work expanded into the golf course industry and lawn services which enabled Ken to work from home. He continued in this line of work for 10-11 years. Ken also worked for a swine facility near Daykin, Nebraska for 3-4 years raising purebred hogs. When hog prices crashed, Ken was laid off from this job. He then worked part time for the Geneva Home Center until health problems forced him to retire in October of 2017. Ken was diagnosed with Acute Myeloid Leukemia and had many radiation and chemotherapy treatments. He received a stem cell transplant from his sister, Margaret, in May of 2018. During this time, Ken and Kathy had to live in Omaha for 100 days to be near the University of Nebraska Medical Center. In 2018 and 2019, the doctors said that Ken was in remission. In October of 2019, he was diagnosed with Myeloid Sarcoma. Ken was a fun, hardworking, kind, and generous man, and he always had a big smile. He loved to cook and enjoyed gardening. Everyone who tried them, enjoyed his spicy dill pickles, horse radish, and jellies. He liked fishing at the lakes and deer hunting in the fall on the farm. For many years, his sister Bernice Blatny accompanied him deer hunting. Ken was proud of his Czech heritage and was an avid genealogist. He also collected stamps, coins, and sports cards. Since 1988, Ken enjoyed Husker Women’s Volleyball and he attended many games over the years including two national championships. He also enjoyed Nebraska Football and Nascar Winston Cup car racing. His favorite pro teams included the Kansas City Chiefs, Denver Broncos, and the Kansas City Royals. Ken also liked to sing 60’s songs, dancing, doing puzzles and playing Sequence with friends, Barbara & Bill Hanson. Ken and the kids always played Monopoly and their games lasted for hours. Ken was preceded in death by his parents; brother Joseph Chromy, Jr.; sisters Janice Stieren Boyd, Bernice Blatny; sisters-in-law Carol Raye Bernasek and Carolyn Erickson; brothers-in-law Hilburt Stieren, Don Nelson, Rod Bernasek and Jerry Erickson. He leaves to mourn his wife Kathryn; son Jeffrey Chromy; daughter Michelle Herold and husband Tom; grandsons Collin Johnson and Andrew Johnson; sister Margaret Nelson and special friend Elmer Huffman; sister-in-law Jo Anne Bernasek; brother-in-law Scott Boyd; and many nieces and nephews.

A Celebration of Life Service for Ken Chromy was held at 11:00 a.m. on Friday, October 30, 2020 at Farmer & Son Funeral Home in Geneva. Kim Dunker officiated the Memorial Service. Ken&#8217;s ashes will be interred at a later date in the Bohemian... View Obituary & Service Information

The family of Kenneth G. "Ken" Chromy created this Life Tributes page to make it easy to share your memories.

A Celebration of Life Service for Ken Chromy was held at 11:00...

Send flowers to the Chromy family.