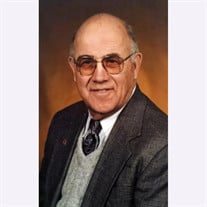 Funeral services for Kenneth will be on Tuesday, December 23, 2014 at 11:00 a.m. at the Exeter United Methodist Church. Pastor Ralph Gaines and Kim Dunker will officiate the services. Military graveside services will be held at 1:30 p.m. Tuesday, at the Exeter Cemetery. Visitation for Kenneth will be on Monday, December 22, 2014 from 1:00 p.m. to 8:00 p.m. at the Farmer Funeral Home in Exeter. Memorials are directed to the Exeter United Methodist Church or the Exeter American Legion. Kenneth Aaron Guthrie was born to Aaron & Meriam (Maier) Guthrie on December 9, 1931 on a farm north of Exeter. He passed away on December 20, 2014 in Lincoln, Nebraska at the age 83 years and 11 days. In 1940, the Guthrie family moved to Iowa for five years. The family then moved back to Exeter where Kenneth attended Exeter High School and graduated with the class of 1950. Following high school, he served in the United States Army for 1 year and 9 months. On September 5, 1953, he married his high school sweetheart, LaVonne Ruhl. To this union 4 children were born. Living on the farm and cultivating the land were his love and passion. He wore out many pliers by digging up the newly planted corn to see if it was sprouting. When grandchildren came along, they were his pride and joy. He attended many of their activities and was proud of all of them. Kenneth was a lifelong member of the Exeter United Methodist Church where he served on the church administrative board. He was also a 50+ year member of American Legion Post 218 in Exeter. For a time, he served on the Exeter Cemetery Board. In October of 2013, Kenneth moved to the High Plains Alzheimer & Memory Care Center in Lincoln. He was loved by everyone there, and they took good care of him during his stay. That is where he left this life and moved on with his journey to a better place on December 20, 2014. This year Kenneth will be spending Christmas with Jesus. Kenneth was preceded in death by his parents and his sister, Ruth. He is survived by his wife of over 60 years, LaVonne; son Dan and wife Kris Guthrie of Lincoln; daughters Debbie Winkler of Lincoln, Dixie and husband Bill Krejci of Exeter, and Denise Cousino and husband Kenny of Lincoln; sisters-in-law Delores Bailey of York and Nancy Ruhl of Arizona; grandchildren Drew & Shannon Winkler of Lincoln, Ben Guthrie of Boston, MA, Laura Guthrie of Lincoln, Claire Guthrie of New York City, NY, Jackson Krejci (Alex) of Lincoln, Dillon Krejci (Amanda) of Lincoln, Ta Lisa Krejci (Ty) of Scottsbluff, Logan Papik (Stephanie) of Lincoln, Hannah Schwanebeck (Zoe) of Lincoln; 3 step grandchildren; great-grandchildren Connor & Jordyn Papik, Kaylee & Carter Krejci, Rylan Winkler, Demarion Brown, and 2 step great-grandchildren.

Funeral services for Kenneth will be on Tuesday, December 23, 2014 at 11:00 a.m. at the Exeter United Methodist Church. Pastor Ralph Gaines and Kim Dunker will officiate the services. Military graveside services will be held at 1:30 p.m. Tuesday,... View Obituary & Service Information

The family of Mr. Kenneth A. Guthrie created this Life Tributes page to make it easy to share your memories.

Funeral services for Kenneth will be on Tuesday, December 23,...

Send flowers to the Guthrie family.