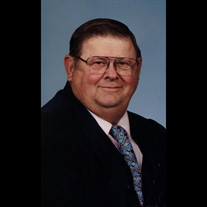 Kenneth Frank Kerwood was born to Donald & Ruth (DeFrain) Kerwood on January 25, 1933 in Alexandria, Nebraska, and passed away on June 24, 2018 at Fairview Manor in Fairmont, Nebraska at the age of 85 years, 4 months, and 30 days. He was the youngest of 3 children in the family. Kenneth grew up on the family farm north of Alexandria. He graduated from Alexandria High School with the class of 1951. He was drafted into the Army and completed basic training at Ft. Riley, Kansas. He served from 1953 to 1955 in Korea and Japan during the Korean War. After his return from the Korean War, he married Jeanne Eleanor Michels on June 26, 1955. They moved to a farm near Bruning, Nebraska in 1956 and were blessed with 4 children: Michel Jeffery Kerwood, Denise Kay Kerwood, Vicki Jo Kerwood and Kimberly Karol Kerwood. Kenneth had a lifelong love of farming and he farmed and raised livestock, including working a poultry business selling eggs to local patrons. He also worked at Hinrichs & Sons Hardware Store during the winter months. In his spare time he enjoyed wood carving. Kenneth was raised in the Alexandria Presbyterian Church. Upon moving to Bruning, he joined the Bruning United Methodist Church where he was a member for 50+ years. He was also a member of the VFW and the Bruning American Legion Durham Mammen Post 166 for 50+ years, where he served as Post commander in 1972 and 1973. Kenneth & Jeanne moved off the farmstead and into Bruning, Nebraska in May of 2011. Grandson, Michel Kerwood, purchased the farmland. Kenneth enjoyed trips to the casinos, including Las Vegas, with his wonderful daughters. Kenneth & Jeanne moved to the Wahoo Assisted Living to be closer to family. After a serious illness, he was transferred to Fairview Manor in Fairmont, Nebraska. Kenneth was preceded in death by his parents Donald & Ruth Kerwood; wife Jeanne Kerwood; and brothers Raymond and Marvin Kerwood. He is survived by his son Michel & wife Waunda Kerwood of Wamego, Kansas; daughters Denise Robeson of Brainard, Nebraska, Vicki & husband Randy Lyons of Omaha, Nebraska, Kimberly & husband Sherman Frahm of Westcliffe, Colorado; grandchildren Michel Kerwood, Melissa Nauman, Seth Robeson, Skyler Robeson, Evan Lyons, Taylor Lyons, Logan Lyons, Tia Frahm, Haley Frahm, and Megan Frahm; 9 great grandchildren; and hunting friend Brian Richardson of Lancaster, South Carolina. A Funeral Service for Kenneth was held on Thursday, June 28, 2018 at 10:30 a.m. at the United Methodist Church in Bruning. Pastor Martin Leeper officiated the service. The recorded selections “So God Made A Farmer” and “Ragged Old Flag” were played during the service. Pallbearers for the service included Michel Kerwood, Randy Lyons, Sherman Frahm, Seth Robeson, Evan Lyons, Logan Lyons, and Brian Richardson. Honorary bearers included Melissa Nauman, Tia Frahm, Haley Frahm, Megan Frahm, Taylor Lyons, and Skyler Robeson. Interment was held in the Bruning Public Cemetery with Military Rites performed by the Bruning American Legion Durham Mammen Post 166. Farmer & Son Funeral Home of Geneva was in care of the arrangments and online condolences can be left at www.farmerandsonfuneralhome.com. Memorials are suggested to the Bruning Public Cemetery.

Kenneth Frank Kerwood was born to Donald & Ruth (DeFrain) Kerwood on January 25, 1933 in Alexandria, Nebraska, and passed away on June 24, 2018 at Fairview Manor in Fairmont, Nebraska at the age of 85 years, 4 months, and 30 days. He was the... View Obituary & Service Information

The family of Kenneth F. Kerwood created this Life Tributes page to make it easy to share your memories.

Send flowers to the Kerwood family.