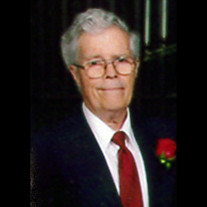 Kenneth Edwin McClellan was born to Hubert and Gertrude (Albro) McClellan on January 2, 1931 at Fairmont, NE and passed away December 11, 2016 at Bryan East Hospital in Lincoln, NE at the age of 85, 11 mo., 9 days. He was their only child. Kenneth grew up in Fairmont in his parents’ drug store, McClellan Drug, and graduated from high school in the class of 1950. He played trumpet in a dance band. He then attended the University of Nebraska Lincoln. During that time, he met Norma Jorgensen, and they were united in marriage on December 27, 1953 in Cordova, NE. To this union, 3 children were born: David, Lori and Amy. Together they lived in Cordova and Ken worked for Lincoln Drug Co. until 1972 when they moved to Gering, NE. He continued to work as a wholesale drug salesman traveling the panhandle until 1984. In 1985, they moved to Kearney with their youngest daughter, Amy, for 3 years before retiring in Cordova. Over the years, Ken enjoyed working on cars, refinishing furniture, woodworking crafts, bottle and antique collecting, model trains, tinkering and fixing just about anything. Ken loved his family, friends, children, grandchildren, great-grandchildren and always their dogs. He also had a great memory, loved visiting and enjoyed telling stories. Kenneth was preceded in death by his parents, Hubert and Gertrude. Kenneth is survived by his wife, Norma, of 63 years, his three children and their spouses, David and wife, Alison McClellan of Gering, NE, Lori and husband, Dwayne Nolte of Bridgeport, NE, and Amy and husband, Wes Kellogg of Kearney, NE, five grandchildren, Jason McClellan, Trista DeLunger, Lance Nolte, Austin Kellogg & Dylan Kellogg, and four great-grandchildren. Funeral Services for Kenneth were Thursday, December 15, 2016 at 10:00 a.m. at Trinity Lutheran Church in Cordova with the Rev. Michelle Kanzaki officiating. Shirley Milton accompanied the congregation in the singing of “Beautiful Savior,” “Just A Closer Walk With Thee,” and “Amazing Grace.” The recorded selection “Stardust” was played as a recessional. Pallbearers for the service included Jason McClellan, Lance Nolte, Dwayne Nolte, Austin Kellogg, Dylan Kellogg, and Wes Kellogg. Honorary Pallbearer was Dwight Johnsen. Interment was held in the Fairmont Cemetery. Farmer Funeral Home of Exeter conducted services. Online condolences may be left at www.farmerandsonfuneralhome.com. Memorials are directed to the Trinity Lutheran Church or the Fillmore County Historical Society-Fairmont Museum.

Kenneth Edwin McClellan was born to Hubert and Gertrude (Albro) McClellan on January 2, 1931 at Fairmont, NE and passed away December 11, 2016 at Bryan East Hospital in Lincoln, NE at the age of 85, 11 mo., 9 days. He was their only child.... View Obituary & Service Information

The family of Kenneth E. McClellan created this Life Tributes page to make it easy to share your memories.

Kenneth Edwin McClellan was born to Hubert and Gertrude (Albro)...

Send flowers to the McClellan family.