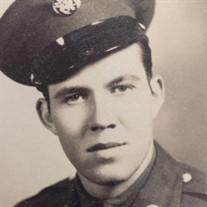 A Funeral Service for Kenneth will be held on Wednesday, July 11, 2018, at 10:30 a.m., at the St. John's Lutheran Church in Ohiowa, Nebraska with PMA Jim Germer officiating. Visitation will be held on Tuesday, July 10, 2018 from 1:00 p.m. until 8:00 p.m. with family present from 6:00 p.m. until 8:00 p.m. at Farmer & Son Funeral Home in Geneva, Nebraska. Military Graveside Services will be conducted in the Ohiowa Public Cemetery following the funeral service. Memorials are to be directed to the St. John's Lutheran Church or the Ohiowa Cemetery Fund. Kenneth Lee Mussman was born March 22, 1921 to William C. and Emma Most Mussman south of Tobias, Nebraska, the 4th of four children. Kenneth passed away July 7, 2018 at age 97, surrounded by family at the home he and his wife Nadine shared in Fremont, Nebraska. Kenneth was baptized and confirmed at St. John’s Lutheran Church in Ohiowa, Nebraska, and graduated from Alexandria High School in 1939. His elementary years were spent at Saline County District 41 country school. As a first grader, he rode his pony to shool and was aided by third grader Bessie Wulf, who helped the young Mussman tie his pony to the post outside before he entered the one-room classroom. At the end of the day, Bessie helped him mount his pony and fix the bridle for the ride home. Kenneth was studious, which was fortunate, since his teacher lived with his family during some of his school years. Kenneth helped his father farm, and when jobs were scarce he spent two summers picking potatoes in Idaho to earn extra money. Returning to Nebraska, Kenneth worked as a farm hand until his induction into the service. On October 20, 1942, Kenneth entered the U. S. Army, serving as a mechanic stateside and in North Africa, Corsica, and France, attaining the rank of Technician, Fifth Grade. When the war ended, he returned to New York Harbor and viewed Lady Liberty on New Year’s Day 1946. While overseas, Kenneth sent instructions to his brother, Leonard, to purchase a diamond engagement ring and propose to his Ohiowa sweetheart, Nadine Weber, on his behalf. The pair were married at St. John’s Lutheran on October 20, 1946. Over a span of 13 years their union was blessed with five children, Kathren Lee, Johnell Rose, Gaylord William, Burnell Kenneth, and David Charles. The couple farmed and raised cattle and hogs a mile and a half east of Ohiowa for 10 years until Kenneth was named Ohiowa Postmaster on July 4, 1960. In addition to his four years in the military, Kenneth served the United States Postal Service for 38 years, for a total of 42 years in government service. In Ohiowa, he was Postmaster for nine years and Rural Route Carrier for five, then later served routes in Eagle, Alva, Shickley and Geneva before retiring. Active in community service, Kenneth served on Ohiowa’s Town Council, St. John’s Church Council, the Fillmore County Centennial Committee, and was a 60-year member of the Ohiowa Legion. Almost daily, he enjoyed morning coffee at the Ohiowa Co-op with friends. To be near their family, Kenneth and Nadine moved to Fremont, Nebraska in 2008, attending First Lutheran Church and enjoying many activites with children and grandchildren. Kenneth was preceded in death by his parents, sisters Dora (Herbert) Marsh, Bessie (John) Endorf, and brother Leonard (Marcella). He is celebrated and survived by his wife of 71 years, Nadine, his children Kathren (Dave) Miller of Lincoln, Johnell (Dan) Pennington of Bennington, Gaylord (Vali) of Fremont, Burnell (Bev) of Bellevue, and David (Laura) of Omaha, as well as 14 grandchildren, Michael (Christina), Grant (Karin), Matthew (Antoinette), Amy (Matthew), Lindsay (Derik), Sarah (Michael), Gena (Aaron), Brianna, Ian, Brayden, Ruby, Grace, Brooklyn, and Noah. They have also been blessed with 15 great-grandchildren, Ava, Eli, Kenneth, Rex, Nora, Alana, Luke, Chase, Ashton, Connor, Benjamin, Isabel, Camila, Caleb, and Jacob. Kenneth’s life has come full circle. Here at St. John’s Lutheran Church he was baptised, confirmed, married and is now released into his Savior’s arms. Pallbearers included Michael Miller, Grant Mussman, Matthew Pennington, Ian Mussman, Brayden Mussman, Noah Mussman and Matthew Knobbe.

The family of Kenneth Lee Mussman created this Life Tributes page to make it easy to share your memories.

A Funeral Service for Kenneth will be held on Wednesday, July...