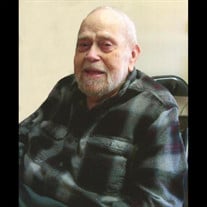 Kenneth Alvin Prater was born to Curtis and Jesse Frances (Chapman) Prater on August 25, 1933 in Mexico, Missouri. He passed away on November 24, 2020 at Heritage Crossing in Geneva, Nebraska at the age of 87 years, 2 months, and 30 days.... View Obituary & Service Information

The family of Kenneth A. Prater created this Life Tributes page to make it easy to share your memories.

Send flowers to the Prater family.