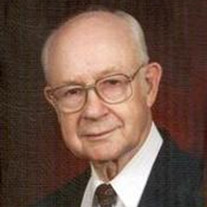 Kenneth Waldean Steider was born May 18th, 1926 to Lee and Emma (Saltzman) Steider on a farm south of Shickley, Nebraska, where he grew up. He passed away September 15th, 2011 at Schowalter Villa in Hesston, Kansas at the age of 85 years, 3 months, and 28 days.  He had an older brother, Lowell, and four younger siblings:  Lester, Madonna, Delmer, and Leonard.  Kenneth attended country school in District 52 and District 58 and graduated from the 8th grade in 1940.  After attending Shickley High School for three years, he had the opportunity to attend Hesston Academy attaining his high school diploma as well as getting credit as a college freshman.  In that same year of 1944, he was also granted a high school diploma from the Shickley Public School.      He accepted Jesus as his personal Savior in his youth and was baptized and became a member of the Salem Mennonite church near Shickley, Ne.  He later transferred his membership to Hesston Mennonite Church where he remained a member.             Since his older brother was drafted during World War II, Kenneth was given a farm deferment, so for the next two years he helped his father on the farm.  Having gone to college for one year, he was eligible to receive a Teacher's certificate, so for the following two years he taught rural schools near Grafton and Shickley.  In the fall of 1948 he returned to Hesston College and received his Associates of Art Degree in the spring of 1949.       Beginning in the fall of 1949 he again taught school, teaching in a rural school near Garland, Ne., School District 69, and School District 77 near Shickley. He then continued his education at the University of Ne. and the University of Illinois at Champaign, IL and received his Master's Degree in Library Science.      From 1955 until the spring of 1966 he served as Librarian and part time English teacher at Hesston College.  At the end of that time, he strongly desired to serve his church, and since he had been exempted during World War II, he decided to devote the next two years doing some type of mission work.    He was called to Taiwan in the fall of 1966, and his two year term of Voluntary Service extended into a lifetime commitment under the General conference Mennonite Mission Board until October of 1993 when he retired after 27 years of service.      During those 27 years he taught Jr. High and High school English at Morrison Academy, in Taichung, worked with Christian Children's Fund, and in 1974 he was called to become an assistant to the administrator at Mennonite Christian Hospital in Hwalien, Taiwan.  In 1977 he took a year's sabbatical to attend the Mennonite Seminary at Elkhart, Indiana, and then returned to his beloved country of Taiwan and his many dear Chinese friends.  He resumed his position at the Hospital, and also began teaching English Classes in the evenings to many professional people who needed to improve their English skills for business purposes.  This mission brought him much joy as he used the Bible, devotional material, and other Christian literature in his lessons, and this became a strong influence and witness for Christ.  Many became Christians as a result.  He served in this capacity until October of 1993 when he retired after 27 years of service, at which time he moved back to Hesston, Kansas.       After retirement Kenneth returned to Taiwan three times for extended visits during which he was again involved in teaching English Classes.  He also kept busy volunteering at the College, even attended some classes,  and enjoyed performances presented at the college.      In January of 2005 he moved to Assisted Living at Schowalter Villa in Hesston.  He loved his family, all his nieces and nephews, and his many friends.  He had a special bond with his Chinese friends who treated him so graciously in Taiwan, the land he considered “home.”      Kenneth demonstrated the love of Jesus to all he met with understanding, tolerance, kindness and patience.      He was preceded in death by his parents, Lee and Emma (Saltzman), Steider and a brother, Lester.  Survivors include brothers:  Lowell Steider of Shickley; Delmer Steider and wife, Eva of Highlands Ranch, CO; Leonard Steider and wife, Jan of Hesston, Kansas,  and Madonna Swartzendruber and her husband, Dan of Shickley;  13 nephews and nieces; 33 great nephews and nieces; 13 great, great nephews and nieces;  and many, many friends.   Services for Kenneth will be held at the Salem Mennonite Church rural Shickley, Nebraska on Monday, September 19, 2011, at 10:30 a.m. Interment will follow in the church cemetery. Visitation will begin Sunday at the Farmer & Son Funeral Home in Geneva, Nebraska at 5:00 p.m. until 8:00 p.m. Memorials may be given to endow the Kenneth Steider Memorial Scholarship for Taiwanese and Intermantional students attending Hesston College. You may give directly on line at www.hesston.edu

Kenneth Waldean Steider was born May 18th, 1926 to Lee and Emma (Saltzman) Steider on a farm south of Shickley, Nebraska, where he grew up. He passed away September 15th, 2011 at Schowalter Villa in Hesston, Kansas at the age of 85 years,... View Obituary & Service Information

The family of Kenneth W. Steider created this Life Tributes page to make it easy to share your memories.