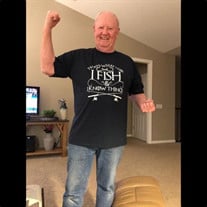 Larry Leon Bornschlegl was born to Leonard Jake and Maxine Mae (Schelkopf) Bornschlegl on October 4, 1943 in Geneva, Nebraska. He passed away on February 12, 2021 at Kearney, Nebraska at the age of 77 years, 4 months, and 8 days. He was one of four children. Larry attended rural country schools outside of Ohiowa and Geneva where his mother taught until attending elementary school and 9th grade in Ohiowa, Nebraska. At that time, the family moved to Geneva where he graduated from high school in 1961. ‘Red’ or ‘Jake’ as his friends called him, was a talented athlete and was selected as an all class all state basketball player at Geneva. He was awarded a full scholarship to the University of Nebraska to play basketball. At UNL, he was a starter on the basketball team and also was a catcher on the varsity baseball team. He was selected as the most valuable player on the baseball team in both 1964 and 1965. In 1980, he was selected as a member of the Nebraska Baseball Hall of Fame, and in later years he served as the secretary/treasurer of that organization. While at UNL, he received his Bachelors, Masters, and Specialist Degrees in education and administration and was an active member of the Beta Theta Pi fraternity. In August of 1964, he was married to Shirley Ann Nunns and to them two children were born: Stephanie and Matthew. Shirley and Larry moved to David City where both of them taught at Aquinas High School with Shirley teaching music and Larry coaching and teaching Biology. After two years, they moved to Omaha where Larry continued coaching basketball at Omaha Holy Name. After their stint in Omaha, they moved to Seward for two years while Larry was in the Investment Business. A principalship in Genoa, Nebraska soon opened up and another move ensued, with the family staying in Genoa for 9 years. In 1980, Larry took a position as a secondary principal at Fairbury Public Schools. In 1992, Larry and Shirley moved to Hastings where Larry served as principal until his retirement in 2002. Mr. “B” as most students called him, was a disciplinarian, but understood why his students occasionally got into trouble. As a friend once stated, “Red has already done what those students are doing now and knows how to deal with them.” He worked hard to gain the respect of his students and colleagues. His attitude was always positive and he could win you over with one of his smiles. Larry was quite active in many activities. After 20 years of officiating many high school and college basketball games, he enjoyed evaluating officials for the Nebraska School Activities Association and was awarded the ‘Outstanding Service Award’ in 2017 for his contributions. In the same year, he was also inducted into the Nebraska High School Athletic Hall of Fame. He also was a member of many social and professional organizations including Nebraska Council of School Administrators, PDK, National Association of Secondary School Principals, and the NSASSP where he served as Region 1 president and was also awarded the ‘Distinguished Service Award.’ He also belonged to the Masonic Lodge and the Elks Organization. After moving to Lincoln, he became an active member of the Redeemer Lutheran Church. Larry was always active and enjoyed the outdoors. He could often be found fishing, hunting with his dog, or taking a trip to the Sand Hills to be with his rancher buddies. He was a good father and was willing to spend valuable time with his children. Saying ‘goodbye’ to them after a visit was hard for him and often, he wouldn’t even say ‘goodbye,’ but would wave and say ‘see you’ and walk away. He was a goal setter and raising a loving family was a goal he achieved only with the help of his wife of 56 years. He loved her dearly!!! Larry was preceded in death by his parents. He is survived by his wife, Shirley of Lincoln, Nebraska; his daughter, Stephanie Eubanks and husband Kevin and their son Becton all of Portsmouth, RI; son Matthew Bornschlegl and wife Staci and their children Joshua, Alli and Emma all of Roca, Nebraska; sisters Linda McCabe and husband Jim of Lincoln, Nebraska, Mary Halkyard and husband Rusty of Gibbon, Nebraska; brother Jim Bornschlegl and wife Cathy of Mitchell, Nebraska; brother-in-law Robert Nunns and wife Linda of Geneva, Nebraska; and many nieces, nephews, and friends. Memorials are suggested to the Geneva American Legion Baseball Program or the Nebraska Baseball Hall of Fame at Box 2, Beatrice, Nebraska 68310. A private Memorial Service for Larry was held on Saturday, February 27, 2021 at 10:30 a.m. at Farmer & Son Funeral Home in Geneva followed by a private Graveside Service in the Geneva Public Cemetery. A Celebration of Life will be held later this summer in Lincoln, Nebraska when Covid 19 restrictions have eased. Farmer & Son Funeral Home is in care of the arrangements and online condolences can be left at www.farmerandsonfuneralhome.com Memorials are suggested to the Geneva American Legion Baseball Program or the Nebraska Baseball Hall of Fame at PO Box 2, Beatrice, Nebraska 68310.

Larry Leon Bornschlegl was born to Leonard Jake and Maxine Mae (Schelkopf) Bornschlegl on October 4, 1943 in Geneva, Nebraska. He passed away on February 12, 2021 at Kearney, Nebraska at the age of 77 years, 4 months, and 8 days. He was one... View Obituary & Service Information

The family of Larry Bornschlegl created this Life Tributes page to make it easy to share your memories.