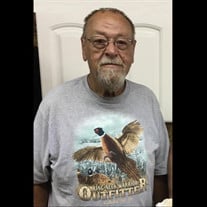 Larry Hinrichs was 1 of 6 children born to Edward and Elsie (Schroder) Hinrichs in Geneva, Nebraska on March 21, 1948. He was baptized at Grace Lutheran Church in Geneva, Nebraska. He passed away in Lincoln, Nebraska on February 18, 2022 at the age of 73 years, 10 months and 28 days. Larry graduated from Geneva High School in 1966. He attended and was a lifelong member of Grace Lutheran Church. Shortly after graduating high school, Larry married the love of his life, Beverly Molthan. They were united in marriage on June 8, 1966 in Geneva, Nebraska at Larry’s family home. They were blessed with 55 ½ years of marriage. To them 3 children were born: Mike, Matt and Denise. Larry enjoyed hunting and fishing with his boys every chance he could when he was able. He also enjoyed going to Branson with his wife and daughter. He had a lifelong passion in landscaping and planting yards and loved to use his talent to help others and beautify God’s land. He loved to remind us all of his accomplishments as we drove by a yard he had seeded. He took great pride in his work and worked hard all of his life. Larry also worked for Geneva Public Schools for 41 years and enjoyed bussing the school kids back and forth to school and sporting events. It was always important to him to make sure the football field looked perfect for the high school football games. He had many wonderful memories from this time in his life. He loved visiting with the children on his bus, as well as the boys he coached on his baseball team for many years. He truly cherished all of these memories and loved keeping in touch with all of his bus kids as they grew up and had children of their own. Everyone always knew Larry was close by when they could smell the Captain Black cherry aroma of his pipe. Larry was such an avid Husker fan. He enjoyed going to Husker basketball and baseball games up until he couldn’t anymore, but mom made sure to keep track of whenever the Huskers played on TV so that dad was sure to watch it. GO BIG RED DAD!! We dressed for you today. We know you will still be cheering the Huskers on in heaven!! He loved to visit in length with people and was always willing to help people whenever he could. He definitely had the gift to gab and is catching up with everyone in heaven now. Larry was preceded in death by his parents and grandparents; mother and father-in-law: sisters Anna Lou (Roemmich) Blatt, Jean Ann Peppie; brothers-in-law James Engle, Richard Peppie, Eddie Roemmich and Bill Blatt. Larry is survived by his wife Bev of Geneva, Nebraska; sons Mike of Geneva, Nebraska, Matt (Christie) of Ashland, Nebraska; daughter Denise Hinrichs of Geneva, Nebraska; brothers Rodney (Alyce) Hinrichs and Butch Hinrichs of Geneva, Nebraska; sister Iola Engle, of Geneva, Nebraska; brother-in-law Bill (Linda) Molthan of Seward, Nebraska; grandchildren Jordan, Jaylee and Connor; one great grandson Kashdon, and numerous nieces, nephews, cousins and friends. A Funeral Service for Larry was held on Thursday, February 24, 2022 at 10:30 a.m. at Grace Lutheran Church in Geneva, Nebraska. Pastor Nicholas Mount presided over the Funeral Service. Denise Hinrichs accompanied the congregation in the singing of “How Great Thou Art” and “Amazing Grace.” The recorded selections “It Is Well,” “Beyond The Sunset,” and “The Lord’s Prayer” were also played during the Service. Pallbearers included Bill Molthan, Curtis Hinrichs, Colin Russell, Jesse Peck, Mark Kimbrough, Sam Dondlinger, Stan Juenemann, and Jeff Emanuel. A Graveside Service was held in the Geneva Public Cemetery following the Funeral Service. Farmer & Son Funeral Home was in care of the arrangements and online condolences can be left at www.farmerandsonfuneralhome.com Memorials are suggested to the family for future designation.

The family of Larry E. Hinrichs created this Life Tributes page to make it easy to share your memories.

Larry Hinrichs was 1 of 6 children born to Edward and Elsie (Schroder)...

Send flowers to the Hinrichs family.