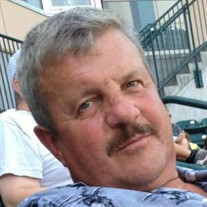 A Memorial Service for Larry will be held on Monday, April 26, 2021 at 10:30 a.m. at St. John Lutheran Church in Ohiowa, Nebraska with PMA Jim Germer presiding. No Visitation - Cremation. Burial of Ashes will be held following the Memorial Service in the Ohiowa Public Cemetery in Ohiowa, Nebraska. Memorials are to be directed to the family to be designated at a later date in Memory of Larry. A Livestream Video of the memorial service will begin at 10:30 a.m. on Monday, April 26, 2021. To view the Livestream Video you can go to Farmer & Son Funeral Home's Facebook Page or in your search engine type @friendlyfuneraldirectors and click the link to Farmer & Son or click this link https://www.facebook.com/friendlyfuneraldirectors/Funeral and it should direct you to our Facebook Page. Larry Dean Mussman was born to Kermit and Alice (Krisl) Mussman on July 1, 1956, at Geneva, Nebraska, and passed away on April 20, 2021, at the Fillmore County Hospital in Geneva, Nebraska at the age of 64. He was one of 3 children in the family. Larry attended Ohiowa Public Schools and graduated in 1974. He was united in marriage to Tina F. Meyer of Tobias, Nebraska, on June 20, 1980 and to them two sons and one daughter was born: Chad, Nick and Heidi. Larry was a lifelong member of St. John Lutheran Church of Ohiowa, Nebraska. He was a member of the Ohiowa Fire Department and a board member of the Glengary Pioneer Cemetery. He farmed and raised cattle. For 30 years, he dug graves by hand for 7 surrounding cemeteries. Larry was preceded in death by his parents; father-in-law, Melvin Meyer; and brothers-in-law, Willard Meyer and Randy Meyer. He is survived by his wife, Tina Mussman, of Geneva, Nebraska; sons, Chad (Kim) Mussman of Ohiowa, Nebraska and Nick (Melissa) Mussman of Ohiowa, Nebraska; daughter, Heidi (Kyle) Knippelmier of Beatrice, Nebraska; ten grandchildren, Cagney, Allison and Barrett Mussman of Ohiowa, Nebraska, Emmett, Madison and Sawyer Mussman of Ohiowa, Nebraska, and Kade, Bo, Crew and Urban Knippelmier of Beatrice, Nebraska; sisters, Donna Meyer of Ohiowa, Nebraska and Sondra (Terry) Backstrom of Ohiowa, Nebraska and sister-in-law, Theresa Nadherny of Geneva, Nebraska.

A Memorial Service for Larry will be held on Monday, April 26, 2021 at 10:30 a.m. at St. John Lutheran Church in Ohiowa, Nebraska with PMA Jim Germer presiding. No Visitation - Cremation. Burial of Ashes will be held following the Memorial... View Obituary & Service Information

The family of Larry D. Mussman created this Life Tributes page to make it easy to share your memories.

A Memorial Service for Larry will be held on Monday, April 26,...