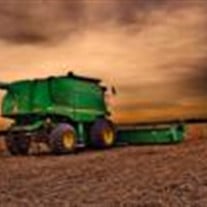 Services for Larry will be held on Monday, October 31, 2011 at 10:30 a.m. at the Ong United Methodist Church with Pastor Dorothy Aspegren officiating. Burial will follow in the Ong Cemetery. Visitation will be held on Sunday from 1:00 p.m. to 8:00 p.m. at the Farmer & Son Funeral Home in Geneva. Memorials are directed to the family. Larry Lee Roush was born to Harold Franklin Roush and Margaret Mae (Johnson) Roush on November 5, 1950 at Deshler, Nebraska, and passed away October 27, 2011 at Fillmore County Hospital in Geneva, Nebraska at the age of 60 years, 11 months. He was one of 4 children in the family. Larry resided on the family farm in Fillmore County until a few days prior to his passing. He graduated from Shickley Public School in 1968. Farming was his life. He took great pride in raising various crops, cattle, sheep and hogs. It was Larry's passion for farming that helped him battle with his MS for 25+ years. Larry was married to Ava C. Hansen of Cordova, NE on February, 22, 1969 and to them 2 children were born. Larry was a member of the Ong Co-op Association board for numerous years. He was also a fireman and EMT for the Ong Volunteer Fire Department. One of Larry's hobbies in life was coin collecting. He had a wonderful collection that he was very proud of. He also enjoyed doing ancestry and family tree work online. He met a lot of people across the United States working on members of his family tree. Larry was very close to and couldn't have been prouder of his four grandchildren. He attended all of their activities and took so much pride in all of their accomplishments. Larry was preceded in death by his parents and father-in-law Woodrow Hansen of Cordova, NE. He is survived by his wife of 42 years, Ava of Shickley, NE. His two daughters Karen and husband Tony Lauenstein and their two boys Tyler and Dylan of Ong; and Lisa and husband Jon Stofer and their two daughters Chloe and Jayden of Geneva, NE. He is also survived by his sisters Wanda (Robert) Paulsen of Chappell, NE, Marilyn (George) Benton of Ong, NE, and Sharon (Al) Gates of Winfield, KS., mother in law Lorraine Hansen of Cordova, NE, Sister in laws Beth (Dwayne) Dinneen of Cordova, NE, Cheri (Bill) Beck of Roca, NE. Brother in laws Chuck (Deb) Hansen of York, NE and Jeff (Angie) Hansen of Cordova, NE. , two aunts, numerous nieces and nephews and a host of friends.

Services for Larry will be held on Monday, October 31, 2011 at 10:30 a.m. at the Ong United Methodist Church with Pastor Dorothy Aspegren officiating. Burial will follow in the Ong Cemetery. Visitation will be held on Sunday from 1:00 p.m.... View Obituary & Service Information

The family of Larry L. Roush created this Life Tributes page to make it easy to share your memories.

Send flowers to the Roush family.