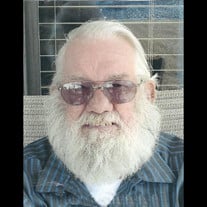 A Memorial Service for Larry will be held on Wednesday, April 18, 2018 at 10:30 a.m. at the Farmer & Son Funeral Home in Geneva. Pastor Stuart Davis will officiate the service. A Committal of Ashes will be held in the Geneva Public Cemetery following the Memorial Service. Military Honors will be provided by the Geneva VFW Post 7102 and the Offut Air Force Base Honor Guard. Memorial are suggested to the Shickley Community Foundation or the Shickley Fire & Rescue Squad. Larry LeRoy Steider was born to William Benjamin Steider and Jeannetta Helena (Knutzen) Steider on March 24, 1939, at the family home near Shickley, Nebraska. He passed away April 8, 2018 at Blue Valley Lutheran Care Home in Hebron, Nebraska at the age of 79 years and 15 days. He was one of 5 children born in the family. Larry grew up on the family farm near Shickley and then moved with his family to Western, NE where his father, Bill, farmed for a year. The family then moved back to Shickley where Larry attended Shickley Public School until his junior year when the family moved again to Geneva, Nebraska where Bill worked for Harrison Karr Plumbing, Heating and Roofing. Larry graduated from Geneva Public Schools in 1957. He worked with his father at Harrison Karr business doing sheet metal work and roofing. In 1961, Larry enlisted in the Air Force, doing his basic training at Lackland AFB in Texas from October 1961 to January 1962, learning his trade as a sheet metal worker that he would perform while enlisted in the Air Force. He was stationed in France and Germany in his early years in the Air Force before returning back to the states. In 1967 he was sent to Vietnam and was stationed at the Tan Son Nhut Air Base. It was while stationed there that the Tet Offensive occurred in 1968 with the Tan Son Nhut Air Base being one of the main targets of the North Vietnamese and the Viet Cong. It was these attacks on Tan Son Nhut Air Base that resulted in Larry acquiring Post Traumatic Stress Disorder. This disorder would haunt him for the remainder of his years. When he came back from Vietnam, he was then stationed at the Otis Air Force Base in Boston, Massachusetts. It was at the Otis Air Force Base where Larry met Nancy E. Claypool who was serving as a civilian employee for the US Government and worked at the Air Base. In October of 1969, he was honorably discharged from the Air Force and he brought Nancy and her two sons back to Geneva to live. They lived in the Meridian Courts first, which was a housing unit in Geneva, while he worked for Nichols Construction driving a gravel truck for them. It was a short-lived career after a train hit his truck. The family then moved to Shickley in 1970, and Larry went to work for Alfs Well Drilling as a welder and working on the drilling crew. He was proud of the fact that he assisted Ron Alfs with building a drilling rig from scratch. Ron designed it and Larry did all the welding on the rig. In July of 1970 Larry and Nancy eloped to the courthouse where they were married. They lived at 302 Campbell Street in Shickley for the remainder of Nancy's years. Nancy passed away in her sleep in January of 1999. Larry and Nancy spent a lot of their time going to Vietnam Veteran’s reunions. Larry also became involved in the United Veteran’s Club in Grand Island. Larry and Nancy built many good friendships during that time with their friends in Grand Island. In 2005, Larry built the house that he and Nancy had always dreamed of. He lived there and spent his time walking around town until he was hospitalized in February of 2011. At this time it was decided that he couldn't live on his own any more. His physical health improved but his mental state didn't allow him to return to his home. He lived in Hebron at the Blue Valley Lutheran Care Home-Garden Memory Support Unit until his death in April of 2018. He was preceded in death by his wife Nancy; parents William and Jeannetta; brothers Don and Billy; and his sister Kay Carlson. He is survived by his 2 step-sons Ian Claypool and wife Tracy and their daughter Heavenly, and Eric Claypool and wife Renee and their children Zachary, Jimmy and Samantha; brother Jim Steider and wife Kim, brothers-in-law Larry Carlson and Paul Checketts and wife Marla; sister-in-law Margaret English; nieces, nephews and special friend Layle Kennel who checked in on Larry when he was still living in Shickley.

A Memorial Service for Larry will be held on Wednesday, April 18, 2018 at 10:30 a.m. at the Farmer & Son Funeral Home in Geneva. Pastor Stuart Davis will officiate the service. A Committal of Ashes will be held in the Geneva Public Cemetery... View Obituary & Service Information

The family of Larry L. Steider created this Life Tributes page to make it easy to share your memories.

A Memorial Service for Larry will be held on Wednesday, April...