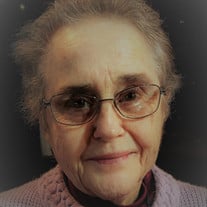 A Funeral Service for Laura will be held on Tuesday, January 9, 2018 at 10:30 a.m. at the United Methodist Church in Geneva, Nebraska with Pastor Michelle Gowin officiating. Visitation will be held on Monday, January 8, 2018 from 1:00 p.m. until 8:00 p.m. with the family greeting friends from 5:00 p.m. until 7:00 p.m. at Farmer & Son Funeral Home - Geneva. Graveside Services will be held at 2:00 p.m. at the Evergreen Cemetery in Superior, Nebraska. Memorials are to be directed to the family for a later designation. Laura Elizabeth Byfield Burns was born to Harold Eugene Byfield and Anna Lucille Eiseman in Jewell County, Kansas on February 14, 1939. She was one of four children. Laura passed away on January 3, 2018, in Lincoln, Nebraska at the age of 78. As a young girl Laura was baptized into the church and attended school in Superior, Nebraska. Laura loved taking care of farm animals and being a member of 4-H. She once had a calf that went all the way to the state fair. Once she married her husband Robert Burns they lived in several different places for Robert’s employment. From Palmer, Ks., Salem, Mo., Colby, Ks., Plainville, Ks. and Ruskin, Ne. In 1978 Laura worked at Ben Franklins’ store in Superior, Ne. She also worked in the nursing homes in Nelson & Hebron, Ne. in the dietary & laundry depts. In 1988 Laura became a widow when Robert was killed in a work accident. Laura & Robert were married for 33 years and had 3 daughters. Laura then moved to Esbon, Ks where she worked on a ranch with cattle, which she really enjoyed. After 10 years she retired and moved to Concordia, Ks where she stayed until September 2016 when she moved to Fairmont, Ne. Laura enjoyed puzzles and cooking. She was an avid reader and loved to garden. When she had a large garden she canned and froze all the bounty. She was a pretty good horseback rider and loved going to church. Laura enjoyed raising her family and did a great job. Preceding her in death were her husband Robert LeRoy Burns, Parents, Harold and Anna Byfield, Brother, Eugene Byfield, Sister, Cora Watkins and her husband Dennis. Mourning her passing is daughters Mary Finke-Deshler, Ne., Rosemary Theobald (Kent)-Fairmont, Ne., Sharon Bliss (Ed)- Hebron, Ne., Grandchildren Jon Sunday, Anna Sunday, Richard Sunday, Roberta Laaker (Scott), Amber Arner (Patrick), Seneca Bohling, Serena Bohling, Stacy Bliss, Lee Bliss (Jessica), and 12 great-grandchildren. Brother, Richard Byfield (Ruby), Sister-in-law, Kathy Byfield, and numerous nieces and nephews and many friends.

A Funeral Service for Laura will be held on Tuesday, January 9, 2018 at 10:30 a.m. at the United Methodist Church in Geneva, Nebraska with Pastor Michelle Gowin officiating. Visitation will be held on Monday, January 8, 2018 from 1:00 p.m.... View Obituary & Service Information

The family of Laura E. Burns created this Life Tributes page to make it easy to share your memories.

A Funeral Service for Laura will be held on Tuesday, January...

Send flowers to the Burns family.