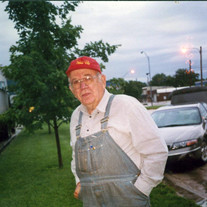 Memorial services will be held for Laurence on Monday, June 27, 2016 at 10:00 a.m. at Grace Lutheran Church in Geneva, NE with Pastor Stephen Kruschel officiating. There will not be any visitation-cremation. In Lieu of Flowers, memorials are to be directed to the family for a later designation. Military inurnment services will take place following the memorial service at St. Mary's Catholic Cemetery in Rural Shickley, NE. Laurence R. Bauer was born to William D. and Sarah C. (Griess) Bauer on November 5th 1930 in Sutton Nebraska and passed away June 19th 2016 at Fillmore County Hospital in Geneva Nebraska at the age of 85 years 7 months and 14 days. He was one of nine children in the family. Laurence attended country school outside of Sutton until 1942 when the family moved to Geneva. He continued his education in Geneva, graduating from Geneva High School in the Class of 1948. Laurence worked on his family's farm until joining the Air Force in 1952. After his service ended Laurence returned to resume farming and working alongside his brother Ronald. At Ronald's wedding Laurence began a romance with his future bride Ethel Gergen. On January 18th 1958 Laurence married Ethel M. Gergen in Shickley Nebraska and to them seven children were born. In the early 1960s Laurence began his extensive trucking career at Lichti Bros. which he worked at a majority of his career. Laurence drove for many companies hauling a variety of cargo including cattle, chemicals, grain and gasoline. Laurence's family was very important to him and he took every opportunity to spend quality time with them when he could, so he would take his children in his truck on short runs. He worked hard and provided for his seven children and always went out of his way to be there for all member of his family and his all of his friends. Laurence never stopped giving of himself and even after retiring from Lichti's he continued to drive a truck, helping local farmers haul their grain. Laurence became a member of Grace Lutheran Church upon moving to Geneva, and remained a member up until his death. Faith and family were both important to Laurence and Sunday was his favorite day of the week because on this day he got both. Throughout the years his children would make trips from where ever they lived to have Sunday diner (lunch) and play cards with him. The strong belief of family first was instilled in all of his children and has been passed onto his grandchildren and great grandchildren. Laurence was well known as a prankster and always had a joke for any situation, even if it wasn't the right situation. He could change the mood of a whole room just by making his entrance and people never forgot him once they met him. Laurence was a proud member of the VFW and spend many hours with his close friends playing pitch in the afternoons. Even though he was a jokester, when it was time to get serious he was all business and took care of what needed to get done. Laurence was proceded in death by his mother and father William D. and Sarah C. Bauer. Brother William Bauer. Sister and brother-in-law Ilene and Harold Miller. Brother-in-laws Walter Griess and Harold Schmidt. Sister-in-law Kathy Bauer. Mother-in-law and father-in-law Leita and Ben Gergen. Brother-in-laws Richard Gergen and Wayne Gergen. He is survived by his wife Ethel. His sons Todd and Stanley Bauer. Daughters Becky, Vickey, and Audrey Bauer, Denise Schropfer, Roxanne Petracek. Brothers Ronald and Lorraine “Butch” Bauer. Sisters Marion Griess, Donna Ulmer, Betty Hesselgesser, and Ruth Schmidt. Grandchildren Brandi (Tony) Biaggio, Tyler Weis, and Nathan Schropfer. Great grandchildren Makenna and Maci Biaggio. Brother-in-law Roger Gergen. Sisters-in-law Janet Gergen and Leora Smith, numerous nieces and nephews and friends.

Memorial services will be held for Laurence on Monday, June 27, 2016 at 10:00 a.m. at Grace Lutheran Church in Geneva, NE with Pastor Stephen Kruschel officiating. There will not be any visitation-cremation. In Lieu of Flowers, memorials... View Obituary & Service Information

The family of Laurence R. Bauer created this Life Tributes page to make it easy to share your memories.

Memorial services will be held for Laurence on Monday, June 27,...

Send flowers to the Bauer family.