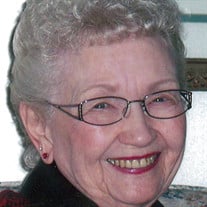 A Funeral Service for LaVerda will be held on Tuesday, October 10, 2017 at 10:30 a.m. at the Fairmont Community Church in Fairmont, Nebraska with Pastor Pat Norris officiating. Visitation will be held on Monday, October 9, 2017 from 1:00 p.m. until 8:00 p.m. with the family being present from 5:00 p.m. until 7:00 p.m. at Farmer & Son Funeral Home in Geneva, Nebraska. Graveside Services will be held following the funeral service at the Fairmont Public Cemetery. Memorials are to be directed to St. Jude's Childrens Research. LaVerda Yvonne Hunt was born to Clarence O. and Elsie M. Schneider on November 8, 1929 at home, and peacefully passed away October 7, 2017 at St. Elizabeth Hospital in Lincoln, NE with her family by her side at the age of 88. She was one of 6 children in the family. LaVerda graduated from Exeter High School in 1946. She then attended the Lincoln School of Commerce. LaVerda worked as a secretary/bookkeeper in Lincoln before marrying Leland Paul Dado of Fairmont, NE. on November 8, 1947, and to them were born 2 children, Sharon Ann and Kathryn Lyn. Leland and LaVerda established guardianship of Pamela and Kimberly Schneider in 1962 and adopted them in April 1964. The family lived around the Grafton, Geneva area before moving to Fairmont where they both resided until their deaths. LaVerda worked for the Gas Company and the Farmers Cooperative in Fairmont until her retirement. She was a life member of the Fairmont American Legion Auxiliary and attended the Fairmont Community Church. LaVerda enjoyed coffee with friends in Fairmont and she especially loved bowling. She loved doing puzzle books, watching game shows, and watching birds outside. LaVerda was an avid sports fan watching sports on TV. She especially enjoyed the Huskers no matter which team was playing. She also enjoyed helping Leland build and finish many woodworking projects before Leland passed away on December 26 1986. LaVerda married Darryl Hunt on October 14, 1989 and moved to Weeping Water NE for a short time before moving back to Fairmont. She enjoyed traveling with Darryl to visit family and friends and also to Branson Missouri where they attended several shows. LaVerda resided in their home until July of 2014, when she moved to Fairview Manner in Fairmont, NE. LaVerda was preceded in death by parents Clarence and Elsie Schneider, husbands Leland Dado and Darryl Hunt, a baby brother Donald Dean, and brother Verdale Schneider. She is survived by brother Henry, sisters Darleen and Charleen, and Sisters-in-law Lucy and Mary. Daughters Sharon Jacobs and husband Jack of Geneva, NE, Kathryn Burback and husband John of Fairmont, NE, Pamela Cowins and husband Greg of Gonzales, TX, and Kimberly Whiteford of York, NE. She was also survived by 8 grandchildren Jennifer, Julie, Paul, Greg, Corey, Wesley, Deidra, and Nicole, 13 great grandchildren, 1 step great grandchild, 1 great-great grandchild, many nieces, nephews and friends.

A Funeral Service for LaVerda will be held on Tuesday, October 10, 2017 at 10:30 a.m. at the Fairmont Community Church in Fairmont, Nebraska with Pastor Pat Norris officiating. Visitation will be held on Monday, October 9, 2017 from 1:00 p.m.... View Obituary & Service Information

The family of LaVerda Yvonne (Dado) Hunt created this Life Tributes page to make it easy to share your memories.

A Funeral Service for LaVerda will be held on Tuesday, October...