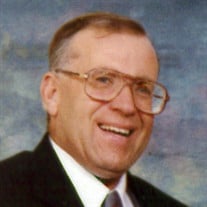 A Funeral Service for Laverne was held on Wednesday, November 27, 2019 at Farmer & Son Funeral Home - Kotas Chapel in Milligan, Nebraska at 1:00 p.m. with Pastor Murry Johnston presiding. There were 3-recorded songs played for Laverne’s service, “Angel Polka” by Vrazel’s Polka Band, “Apples, Peaches, Pumpkin Pie” by Frankie Yankovic and “In Heaven There Is No Beer” by Frankie Yankovic. Pallbearers included Kevin Clark, Zach Timmermans, Brad Conner, Paul Underwood, Dean Bartu, David Krupicka and Jerry Volkmer. Graveside Services were conducted at the Bohemian National Cemetery in Milligan, Nebraska following the funeral service. Memorials are to be directed to the family to be designated at a later date. Farmer & Son Funeral Home was in charge of funeral arrangements. Laverne Louis Krupicka was born to Louis Alfred Krupicka and Elsie June (Luzum) Krupicka on March 17, 1949 at the Geneva Hospital in Geneva, Nebraska, and passed away November 21, 2019 at his home in McCool Junction, Nebraska at the age of 70. He was one of 2 children in the family. He grew up on the family farm east of McCool Junction and attended Exeter Public Schools and graduated in 1968. Laverne enjoyed raising livestock as well as farming with his father. His interests included going to parades and festivals, such as the Milligan June Jubilee and Wilber Czech Days. He loved listening to polka music and listened to the morning polka shows on Sunday mornings. In high school Laverne was a member of the FFA. His hobbies included putting together model cars. Laverne also enjoyed the holidays, celebrating birthdays and attending family functions. Laverne was preceded in death by his mother, Elsie (Luzum) Krupicka and father, Louis Krupicka. He is survived by his sister, Kathleen and brother-in-law, Gary Vodicka, of Fairmont, Nebraska; nephew, Randy Vodicka, of Fairmont, Nebraska; niece, Shelley Timmermans; great-nephew, Zach Timmermans, of Henderson, Nebraska; great-niece, Mikaela Timmermans, of Lincoln, Nebraska and many cousins and friends.

The family of Laverne L. Krupicka created this Life Tributes page to make it easy to share your memories.

A Funeral Service for Laverne was held on Wednesday, November...