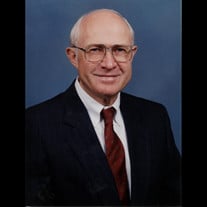 Lawrence Vernon Lichti was born to Alvin Lichti and Ruth (Kauffman) Lichti on July 16, 1933 at rural Ong, NE, and passed away April 28, 2019, at Heritage Crossings in Geneva, NE at the age of 85. He was one of two children in the family. Lawrence was a lifelong resident of Shickley. He graduated with the Shickley High School class of 1950. He loved keeping in touch with his classmates through the years. In 2000, he and Edna hosted a 50th Anniversary gathering in their home. In 1954, Lawrence and his brother Richard started Lichti Bros. Oil Co. They had a Full-Service Filling Station and delivery trucks for gasoline, diesel, and heating oil. Through the years, propane delivery and convenience stores were added. For a time, Lawrence and RIchard also ran a transport company and had a construction crew. Lawrence was married to Edna Faye Kempf of Shickley on October 10, 1954, and they had two sons, Douglas and Timothy. Lawrence was a lifelong active member of Salem Mennonite Church in rural Shickley. He served the community as a Volunteer Fireman, a member of the Shickley Board of Education, and on the governing board of Educational Service Unit #6. Lawrence was an avid Shickley proponent, serving on the Shickley Community Improvement Project board, as an instigator of the Shickley Community Foundation, and serving with numerous other organizations. He served his industry on the Nebraska Petroleum Marketers and Convenience Store Association Board, as a member and President of the Nebraska Propane Gas Association, for 12 years on the Board of Directors of the National Propane Association, and as chairman of the National “Ancient Gassers,” a gathering of veteran members of the propane industry. After retirement, he thoroughly enjoyed serving with the Nebraska State Patrol Motorist Assist Program for seven years. Lawrence was preceded in death by his parents Alvin and Ruth Lichti, parents-in-law Roy and Barbara Kempf, sister-in-law Roine and her husband Ivan Birky, sister-in-law Bernice Steider, and brother-in-law Wayne and his wife Esther Kempf. He is survived by his wife Edna, of Shickley; his brother Richard (Wilma), of Geneva; sons Dr. Douglas (Gayle) of Omaha, and Timothy (Judy) of Shickley; grandchildren Kristin (Dave Kaiser), Brandon (Michelle) Lichti, Sara (Forrest Schaeffer), Erin (Van VanderSchaaf), Kate (Caleb Hendrickson), Anna (Lane Baker), and Chris; 7 great-grandchildren; his brother-in-law Lowell Steider, of Geneva; and numerous nieces and nephews. A Funeral Service for Lawrence was held on Wednesday, May 1, 2019 at 10:30 a.m. at Salem Mennonite Church in Shickley, Nebraska. Pastor Shawn Nolt officiated the services. Marti Alfs provided the prelude and postlude music. Don Kempf led the congregation in the singing of “How Great Thou Art,” “Amazing Grace,” and “Doxology.” Lawrence’s grandchildren sang the special musical selection, “A Living Prayer.” Pallbearers for the service included Brandon Lichti, David Kaiser, Forrest Schaeffer, Chris Lichti, Van VanderSchaaf, Caleb Hendrickson, and Lane Baker. Interment was held in the Salem Mennonite Cemetery following the Funeral Service. Farmer & Son Funeral Home was in care of the arrangements and online condolences can be left at www.farmerandsonfuneralhome.com Memorials are suggested to the Shickley Community Foundation, PO Box 372, Shickley, NE 68436.

Lawrence Vernon Lichti was born to Alvin Lichti and Ruth (Kauffman) Lichti on July 16, 1933 at rural Ong, NE, and passed away April 28, 2019, at Heritage Crossings in Geneva, NE at the age of 85. He was one of two children in the family. Lawrence... View Obituary & Service Information

The family of Lawrence Lichti created this Life Tributes page to make it easy to share your memories.