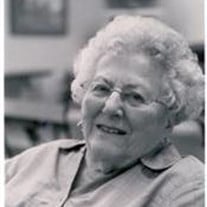 Lenora Hass was born on August 23, 1923, in Crete, NE to Anton and Helen Kupka.  She went to dance with her husband, Renye, in Heaven on January 2, 2012, at the age of 88.  Her growing up years were spent in Crete doing a variety of jobs.  During high school and a year after graduation, she sold tickets at Lyrie and Isis theaters.  Lenora taught school in Saline County from 1941-1946.  In May of 1946, she was a bank teller for City National Bank.  Being a teller at that time also involved typing, using the posting machines and anything else that needed to be done.  In 1945, she worked at Stover Candy Co in Lincoln.  Lenora also volunteered to make bandages at the Red Cross during WWII.The Kupka family always loved music.  Her Dad played many instruments and was in a band.  The Kupka sisters sang together every chance they got.  Lenora and Renye enjoyed their Saturday nights dancing at Pla-Mor with family and friends.On October 14, 1948, Lenora married Renye Hass. She taught school again at District 5 in Fillmore County from 1950-1952.   Into this union, three children were born; Maribeth, Marsha and Bob.  She worked side by side with Renye on the farm.  This city girl learned to collect eggs, catch the chickens to butcher, make great sandwiches to take to the field, tend a mean garden and learn how to cook on a wood-burning stove.  She was a great cook taking care of not only her family, but her neighbors and church family too.When the children were old enough to fend for themselves after school, she went to work for Bethesda Care Center for 1 ½ years in housekeeping in April 1971.  Maribeth was their bookkeeper, but went off to college in 1971, so Lenora took over the bookkeeping job from Sept 1971 to 1984.  Her teaching skills were called for again when she became Russell Clark’s companion from 1986 to 1999, keeping his mind active with games and puzzles and encouraging him to go for walks down the hall.Lenora was a fifty-plus year member of the United Methodist Church, United Methodist Women and a 75-year member of WFLA Lodge #3 and a 63-year member of the American Legion Auxiliary.  She is survived by daughters Maribeth (Dave) Stone, St. Peters, MO; Marsha (David) Swanstrom, North Platte, NE; son Bob (Jackie)  Hass, York, NE; granddaughters Michelle Stone, Indianapolis, IN; Angela Hass, Aurora, NE; sisters Dorothy Rejcha, Beatrice, NE; Leona (Ed) Jirak, Boise, ID; nephews Jim (Susie) Boise, ID; Tom (Susan) Layfette, CO; niece Jana Jirak, Lansing, MI; and many cousins and friends.  She was preceded in death by her husband and parents. Funeral services will be conducted from the United Methodist Church in Exeter, Nebraska on Thursday, January 5, 2012 at 10:30 a.m. with Pastor Ray Underwood officiating.  Visitation will be held from 1:00 p.m. to 8:00 p.m. at Farmer Funeral Home in Exeter. Leonard Krasser gave the Eulogy.  Delores Bailey accompanied Jim Jirak who sang "Just As I Am Without One Plea" and "Amazing Grace."  Casket bearers were Anthony Nun, Matthew Nun, Alan Michl, Al Hosek, Bob Jungst and Kelly Homolka.  Interment was in the Bohemian National Cemetery.  Memorials are directed to the family.

Lenora Hass was born on August 23, 1923, in Crete, NE to Anton and Helen Kupka.  She went to dance with her husband, Renye, in Heaven on January 2, 2012, at the age of 88.  Her growing up years were spent in Crete doing a variety of jobs.... View Obituary & Service Information

The family of Lenora Hass created this Life Tributes page to make it easy to share your memories.

Send flowers to the Hass family.