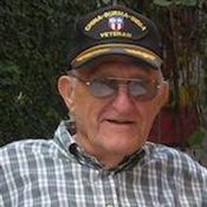 Leo Joseph Soukup was born to Joseph J. Soukup and Mary (Macku) Soukup on 11.9.1923, Exeter, NE. He passed away 3.6.2013 at Exeter Care Center, at the age of 89 years. He was the youngest of 4 children and grew up on a farm south of Exeter. Leo attended School District 25 and District 33. He graduated from Exeter High School in 1941. Upon graduation, Leo wanted to attend Lincoln School of Commerce but his folks didn’t have the money so he learned he could go to Bellevue NYA School, a government school. Stub Moor and Roy Hall, his buddies, weren’t interested but two weeks later, here came Roy and Ray Hall and Stub. He received his room and board plus $10.80 a month and his training as a machinist helper. He planned to go to Seattle but Martin Bomber Plant needed machinists so they went, where they met Heidtbrink who soon became a lifelong friend. He became a milling machine operator that produced the B26 Bomber. His starting wage was 50¢ an hour. Living in a boarding house with Stub and Heidtbrink his meals included a hamburger steak for 98¢ at Nash Café. Leo bought a new rifle and was so proud of it. He went around Omaha and shot grasshoppers. Heidtbrink sent him a letter that the military needed rifles and would return it after the war. So Leo took the gun apart and put his name on it, put it back together and was ready to give it to the military when it turned out that it was all a joke. After about a year he decided to enlist in the Army Air Corp. He was sworn in the Air Corp 12.9.1942 at Fort Crook, NE, went to Leavenworth Kansas for military clothes and then to St. Petersburg , Florida for training. His trained in Lincoln for Air Craft mechanics, Chaunte Field, Illinois for engine specialist, Lowry Field, Denver Colorado to take machine guns apart and to fuse bombs. He was stationed in Saline Kansas at Smokey Hill Base, then overseas on USS Mt Vernon ship to Bombay, India. Leo took a train to Karagpur and Calcutta, India. He went to China on an assignment, was in India about a year, then flew to Tinanin, Guam and Saipan and flew over enemy territory. He was in Tinanin when the Atomic bomb was dropped. He served almost 3 years and was discharged in Lincoln on 10.24.1945 with the rank of Staff Sargent. He received a Good Conduct Metal, Presidential Unit Citation and Asiatic Pacific Ribbon with 6 battle stars. Returning home, he helped his father farm while the fall and winters he worked for Jerry Betka dragging roads, Joe Matejka-carpenter helper, Dick Williford-mechanic and parts man, Daniels and Bush in Milligan picking up cream, eggs and poultry in the country and surrounding towns and for Babe Duba-cut up car bodies. Leo met his wife of 44 years at a dance in Burress NE. The courtship lasted 1½ years and they married 2.9.1951. They made their home on a farm 2½ miles north of Milligan. To this union two boys were born, Kenneth and Richard. Leo and Ella Mae loved to travel and did so with their sons. They attended many of Leo’s China, Berma, India and Air Force reunions. Leo retired in 1988 from farming and spent many winters in south Texas “The Valley”. After retiring he worked for Albert Kaiser and Roy Hall. Leo received his 50 year pin for the ZCBJ Lodge and a 50+ member of Post #240 America Legion of Milligan, permanent member of the Veterans of Foreign Wars Post 7102 of Geneva, a permanent member of the Nations and State CBI Veterans Organization, Member of the 20th Air Force and of the 58th Bomb Wing Veterans Association. After Ella Mae passed away Leo spent his time fishing with his grandsons, Cody and Kirby and attending their ballgames and events when he was not in wintering in southern Texas. Leo loved to dance and he met the two loves of his life on the dance floor, Ella Mae Svec Soukup and Verona Wallace. His nephew, Ernie Luksik, held a special place in his heart as he became his driver to Texas and took care of him this winter while in “The Valley”. Leo was preceded in death by his parents; wife Ella Mae, sisters Viola Luksik and 2 infant sisters; 4 brother-in-laws; 4 sister-in-laws and Grandson Drew Soukup. He is survived by son & wife Ken & Lisa Soukup of Exeter, son & wife Richard & Denise Soukup of Valparaiso, NE, grandsons Cody & Kirby of Exeter, step-granddaughter & husband Sarah and TJ McGee of Urbandale, IA, step-grandson & wife Shane and Stacey Murray of Gulf Port, MS and step-grandson Lee Murray of Valparaiso, NE; step-great grandchildren Connor Murray and Anna McGee; brother-in-law Alfred Krupicka of Friend, nieces, nephews and a host of other relatives and friends. Funeral services were conducted from the Farmer Funeral Home in Exeter, Nebraska on Saturday, March 9, 2013, with Kim Dunker officiating. Musical selections for the service were, “Make Someone Happy” and “Winter Texan.” Casket bearers were Ernie Luksik, Allen Zumpfe, Neal Filipi, David Krupicka, Steve Rhodes and Lee Murray. Military graveside services were provided by the Milligan Ameriacan Legion HSSK Post #240 at the Exeter Cemetery. Memorials are directed to the Milligan or Exeter American Legion or the Geneva VFW. Farmer Funeral Home was in charge of the arrangements.

The family of Leo Soukup created this Life Tributes page to make it easy to share your memories.

Send flowers to the Soukup family.