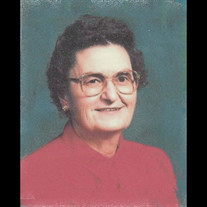 Funeral services for Leona will be Wednesday, February 10, 2016 at 10:00 a.m. at Farmer & Son Funeral Home in Geneva. Pastor Diane Ryder will officiate the service. Graveside services will follow the funeral and be held in the Geneva Public Cemetery. Visitation will be Tuesday from 2:00 p.m. to 8:00 p.m. at the Farmer & Son Funeral Home in Geneva. Memorials are directed to the family. Leona Maxine (Rezny) Skala was born to Frank and Ella (Rezabek) Rezny on January 7, 1929 in Western, Nebraska. She passed away on February 7, 2016 at Heritage Crossings in Geneva, Nebraska at the age of 87 years and 1 month. She was one of 4 children born to the family. The family moved to Dorchester in 1942. In her youth, Leona attended country School Districts 32 and 79. She graduated from Dorchester High School in 1946. When Leona was 16, she worked at Goodyear during the summer. After she graduated, she worked for Gooch’s Mill in Lincoln, Nebraska and Crete Mills in Crete, Nebraska. Leona married Albert Skala on May 24, 1949. They lived on a farm by Dorchester, Nebraska. They had two children: daughter Linda and son Gary. In 1952, they moved to a farm near Geneva, Nebraska. On October 24, 1979, Albert passed away and Leona moved into town. She worked at the Safeway grocery store until it closed in 1982. She then took a position as a food service worker at the Geneva Youth Rehabilitation and Treatment Center. In 1990, Leona became the Food Service Manager at YRTC. She retired in 1996. Leona loved farm life. She worked right beside her husband on the farm and helped to care for their livestock. She always had a large garden, even when living in town by herself. She loved to can and freeze the produce from the garden and, of course, share it with family and friends. Leona just loved to cook and bake. She enjoyed making large family meals for holidays. A fond time she mentioned to the family was the early morning breakfasts she made for son and great granddaughter McKenna. Cooking and baking and sharing it was one way she showed her love. She took special pride in everything her 3 grandchildren and 7 great grandchildren did. She enjoyed attending their programs and games. She made sure she taught her grand daughters and great grand daughters how to make kolaches. She was very proud of them when their kolaches won Grand Champion ribbons at the County Fair. When her children were small, she was also active as a Cub Scout and 4-H leader. Leona would start a conversation with everyone she met. She loved to share her baking, and a lot of people got to enjoy her kolaches. She was always willing to lend a helping hand to anybody in need, and she usually brought some baking along to share. Leona loved the outdoors, especially fishing. Some of her favorite memories included all the camping trips the family enjoyed while the children were growing up. Leona also enjoyed playing cards and going on bus trips and to the horse races with her very special friend, Jake Schaldecker. As a grand daughter said, “She was one of the luckiest people I know playing bingo.” Leona was preceded in death by her husband, Albert Skala; father and mother Frank and Ella Rezny; brother Melvin Rezny; and sister Norma Shestak. She is survived by her son Gary Skala and wife Kathy; daughter Linda Schmidt and husband Dennis all of Geneva, Nebraska; sister Delma Svarc of Crete, Nebraska; grandchildren Amy Gonzalez and husband Louie of Geneva, Nebraska, Jamie Martinsen and husband Chad of Elgin, Nebraska, Jeff Skala of Geneva, Nebraska; great grandchildren Riley Chapman, McKenna Skala, Callie Gonzales, Cayden Gonzales, Kaylee Martinsen, Brenna Martinsen, and as Leona proudly said her ‘namesake,’ Braeylyn Leona Viola Martinsen; her special friend Jake Schaldecker, and a host of family and friends.

Funeral services for Leona will be Wednesday, February 10, 2016 at 10:00 a.m. at Farmer & Son Funeral Home in Geneva. Pastor Diane Ryder will officiate the service. Graveside services will follow the funeral and be held in the Geneva Public... View Obituary & Service Information

The family of Leona M. Skala created this Life Tributes page to make it easy to share your memories.

Send flowers to the Skala family.