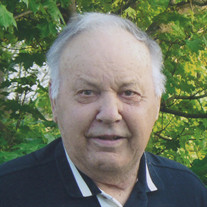 A Mass of Christian Burial will be held on Friday, January 19, 2018 at 10:30 a.m. at St. Joseph's Catholic Church in Tobias, Nebraska with Fr. Craig Doty as the celebrant. Praying of the Rosary will be held on Thursday, January 18, 2018 at 7:00 p.m. at Farmer & Son Funeral Home - Kotas Chapel in Milligan, Nebraska. Visitation will be held on Thursday, January 18, 2018 from 1:00 p.m. until 7:00 p.m. (start of the Rosary) at the Farmer & Son Funeral Home - Kotas Chapel in Milligan, Nebraska. Military Graveside Services will be held at the Tobias Cemetery following the Funeral Mass. Memorials are to be directed to the family for a designation at a later day. Leonard Joseph Baxa, son of Joseph Baxa Sr. and Lydia (Lorenz) Baxa was born November 5, 1925 near Tobias, Nebraska. He passed away on January 15, 2018 at Tabitha Nursing Center at Crete, Nebraska at the age of 92 years-2 months-10 days. Leonard graduated from Tobias High School in 1944. After graduation he farmed with his father. July 1945 he was drafted into the United States Navy and was stationed in San Diego, California. After his basic training he was sent to Guam where he was stationed until his discharge in July of 1946. He then returned home and began farming. On May 31, 1949, he was united in marriage to Marvel Jansky. They made their home on a farm Northeast of Tobias where they lived until March of 2017, when they moved to Tabitha of Crete. To this union 10 children were born, 8 sons and 2 daughters. Leonard was a charter member of the American Legion Post #311 of Tobias where he served as a member of the Color Guard for many years. He served on the Tobias School Board and was active in the consolidation of the Meridian Public School. Leonard was a bus driver for Meridian Public Schools for 9 years. He was an active member of St. Joseph’s Catholic Church all of his life. Leonard loved to work the fields with his John Deere tractors and before the more technical models came out, he liked to work on them when they needed it. For several years he did custom corn shelling, grain hauling and swathing hay for fellow farmers. In 1956 he worked for Chalmers & Barton, where he helped build the Fairmont Grain Elevator. While working at lunch time he always enjoyed eating fried cold egg sandwiches Marvel made for him. Leonard was a loving husband, father, grandfather and great-grandfather. He leaves to mourn his wife, Marvel, sons, James Leonard and Peggy of Crete; Daniel Joseph and wife, Julie of Western; Steven Ray of Wilber; Ralph David and wife, Jan of Tobias; Leonard John and Betty of Beatrice; Kevin Dean and wife, Dawn of Hickman and Michael Robert and wife, Lisa of Clay Center, Nebraska. Daughters, Connie Lee Novotny of Sioux Falls, South Dakota and Sandra Renee VandenHoek of Jasper, Minnesota. 23 grandchildren, 3 step-grandchildren, 30 great-grandchildren and 5 step-great grandchildren. Brother, Joseph Baxa Jr. and wife, Eleanor of Tobias, nieces, nephews and many other relatives and friends. Preceding him in death were his parents, son, Allen Gene, son-in-law, Wayne Novotny, sister, Dorothy Dobesh, and brother-in-law, Irvin Dobesh.

A Mass of Christian Burial will be held on Friday, January 19, 2018 at 10:30 a.m. at St. Joseph's Catholic Church in Tobias, Nebraska with Fr. Craig Doty as the celebrant. Praying of the Rosary will be held on Thursday, January 18, 2018 at... View Obituary & Service Information

The family of Leonard J. Baxa created this Life Tributes page to make it easy to share your memories.

A Mass of Christian Burial will be held on Friday, January 19,...