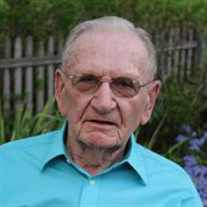 Leonard J. Fiala, 90 passed away peacefuly on December 21, 2014 after a brave battle with esophageal cancer at Fairview Manor in Fairmont. Leonard was born to Joesph J. and Hermania A. (Rerucha) Fiala in Bruno on Septemb¬¬er 9, 1924. He was the eldest of three sons, Leonard, Edmund, and Richard. Leonard was married on June 19, 1947 at Dwight Assumption Catholic Church to Regina M. (Houdek). Leonard was a World War II Army veteran. Serving in France/Germany/Austria from July 1944 to July 1946 as a machine gunner. Upon his return home, Leonard started, his life vocation, farming near David City and continued farming for 56 years by Polk, Central City and Geneva. Leonard was a partner in the John Deere Implement dealership in Geneva from 1969 – 1971. Tractor pulling was Leonard’s greatest passion being sponsored by Minneapolis Moline, John Deere and International dealers. Restoring old tractors was one of his hobbies one of which he drove in the 4th of July Parade in Geneva in 2013. Leonard was a member of the Knights of Columbus and was a 3rd Degree Knight. He was also a member of the VFW Post 7102 and American Legion Post #68. Leonard is preceded in death by his son Larry R. Fiala of Strang, brother Richard (Skip) Fiala two half- brothers Joe and Marvin. He is survived by his wife Regina and two daughters; Jean Huntington (Dave) of Katy, TX and Deborah Edgar ( Mike ) of Arlington, TX and daughter-in-law Connie Fiala (widow of Larry) and Grandchildren, Lance R. Fiala (Dana) of Strang, Laci Fiala (Aaron) of Canton, OH, Kevin Larson (Brittany) of Lincoln, Alicia Micek (Aaron) of Lincoln, Cody Loyd (Jordan) of Fort Worth, TX and six (6) great grandchildren. Also survived by his brother Edmund Fiala, half- sisters Evelyn, Aldeane and MaryAnn. Funeral Mass for Leonard will be 10:30 am Saturday, December 27, 2014, at the St. Joseph's Catholic Church in Geneva, Nebraska. Rosary will be 7 pm Friday, December 26, 2014 at St. Joseph's Catholic Church. Public visititation is Friday from 1 pm until 5 pm at the Farmer & Son Funeral Home in Geneva, Nebraska. Committal with Military graveside services will be held at the St. Joseph's Cemetery following the service. Memorials are directed to St. Joseph's Catholic Church, AseraCare Hospice or the Geneva VFW Post 7102

Leonard J. Fiala, 90 passed away peacefuly on December 21, 2014 after a brave battle with esophageal cancer at Fairview Manor in Fairmont. Leonard was born to Joesph J. and Hermania A. (Rerucha) Fiala in Bruno on Septemb¬¬er 9, 1924. He was... View Obituary & Service Information

The family of Leonard J. Fiala created this Life Tributes page to make it easy to share your memories.

Send flowers to the Fiala family.