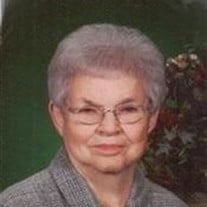 Letha Fern (Holtmeier) Bartels, daughter of William and Amanda (Heidemann) Holtmeier was born March 9, 1929 at Tobias, Nebraska. She was one of five children in the family. Letha was received into God’s Kingdom through holy baptism on March 24, 1929 at Zion Lutheran Church of Tobias, Nebraska by Pastor E.O. Potratz. She was confirmed in her baptismal vows at the same church on May 3, 1942 by Pastor C.F. Schrein. Letha attended Zion Lutheran School and graduated from Tobias High School in 1946. On May 18, 1947, she was united in marriage to Vernon Bartels of Tobias. God blessed this union with two sons, Lloyd and Lyle. After her children were grown, Letha went to college to obtain her license as a Licensed Practical Nurse and worked 23 years in the nursing field. The Lord called her to her heavenly home on Thursday, September 5, 2013 at the age of 84 years, 5 months, and 26 days. Letha was preceded in death by her parents William and Amanda; her husband Vernon; and her sisters Ruth Eggerling and Betty Endorf. She is survived by her sons Lloyd and wife Cindy of Bruning, Nebraska and Lyle of Tobias, Nebraska; two granddaughters Tammy George and husband Joe of Glen Allen, Virginia and Andrea Henderson and husband Chris of Gallatin, Missouri; four great grandchildren Bridget and Alexandra George and Cole and Emma Henderson; sisters Evelyn Wellman and Doris Pohl of York, Nebraska; nieces, nephews and many relatives and friends. Funeral services for Letha were held on Monday, September 9, 2013 at 2:00 p.m. at the Zion Lutheran Church in Tobias with Pastor Ryan Meyer officiating. Janile Campbell accompanied the congregation in the singing of “I Know That My Redeemer Lives,” “Amazing Grace,” “How Great Thou Art,” and “Behold A Host Arrayed In White.” Pallbearers for the service included Chris Henderson, Vance Bartels, Ray Capek, Glen Endorf, Jerry Brandt, and Mike Hoffschneider. Honorary pallbearers were Galen Endorf and Joseph George. Interment was held in the Zion Lutheran Church Cemetery. Farmer & Son Funeral Home of Geneva was in charge of the arrangements. Memorials are directed to the family for later designation.

Letha Fern (Holtmeier) Bartels, daughter of William and Amanda (Heidemann) Holtmeier was born March 9, 1929 at Tobias, Nebraska. She was one of five children in the family. Letha was received into God&#8217;s Kingdom through holy baptism... View Obituary & Service Information

The family of Letha F. Bartels created this Life Tributes page to make it easy to share your memories.