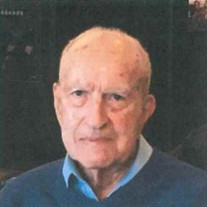 A Funeral Service for LeVoy will be held on Wednesday, May 11, 2022 at 10:30 a.m. at the Salem Mennonite Church in rural Shickley, Nebraska with Pastor Ben Schlegel presiding. Visitation will be held on Tuesday, May 10, 2022 from 1:00 p.m. to 8:00 p.m. with family present from 5:00 p.m. until 7:00 p.m. at Farmer & Son Funeral Home in Geneva, Nebraska. Graveside Services will be conducted following the funeral service in the Salem Cemetery in rural Shickley, Nebraska. Memorials are to be directed to the Salem Mennonite Church. Livestream will begin by 10:30 a.m. on Wednesday for the funeral service. To view the Livestream Video you can go to Farmer & Son Funeral Home's Facebook Page or in your search engine type @friendlyfuneraldirectors and click the link to Farmer & Son or click this link https://www.facebook.com/friendlyfuneraldirectors/Funeral and it should direct you to our Facebook Page. LeVoy's funeral service will also be available via livestream on the Salem Mennonite YouTube page. LeVoy Dean Saltzman was the youngest of six children born to Peter Saltzman and Elizabeth (Reeb) Saltzman on September 25, 1928, in Shickley, Nebraska. LeVoy passed away on May 07, 2022 at Heritage Crossing in Geneva, Nebraska at the age of 93 years, 7 month and 12 days. LeVoy graduated from Shickley Public School in 1947. He attended Kearney State College where he received a Teaching Certificate. LeVoy taught in School District 56 for two years. After that, LeVoy went into farming with his father and shortly after on his own. Along with farming, LeVoy also worked as a carpenter in the community. Many projects, large and small, were completed over the years. LeVoy and Norma LaVae Kennel were married in Shickley, Nebraska on September 18, 1952. They lived on two farms in Fillmore County before moving to their long time residence in Shickley. Together, they were blessed with two children, Kurt Alan and Holly Joy. LeVoy was a lifelong member of Salem Mennonite Church in Shickley. Throughout his life, he was very involved in the church activities. Just a few of the positions included Trustee, Treasurer, Budget Committee, Building Committee and Sunday School Superintendent. For more than 20 years, LeVoy and Norma spent their winters in Arizona. They liked to call the family and report the temperature in Arizona while they were back home freezing in Nebraska. LeVoy and Norma loved to play music together and spent many hours entertaining the residents of local retirement homes and senior centers. He enjoyed playing the guitar, harmonica and accordion. LeVoy was always working on a craft project. Over the years he made several grandfather clocks and school clocks. Taxidermy was one of his favorite hobbies. Each fall, there were always several deer heads in various stages of completion hanging in the garage. During a craft show in Arizona, LeVoy became interested in making cigar box guitars and carving and painting gourds. LeVoy and Norma enjoyed attending craft shows in the area and selling their crafts. The cigar box guitars were always used while entertaining at the local retirement homes and senior centers. LeVoy is survived by his son Kurt Saltzman and wife Dixie of Lincoln, Nebraska; daughter Holly Johnson and husband Steve of Ong, Nebraska; grandchildren Jenna Theis and husband Jeff of Geneva, Nebraska, and Tiffany Barnett and husband Justin of Cave Creek, Arizona; two great grandchildren: Halle and Alexa Theis. LeVoy was preceded in death by his parents and all brothers and sisters.

A Funeral Service for LeVoy will be held on Wednesday, May 11, 2022 at 10:30 a.m. at the Salem Mennonite Church in rural Shickley, Nebraska with Pastor Ben Schlegel presiding. Visitation will be held on Tuesday, May 10, 2022 from 1:00 p.m.... View Obituary & Service Information

The family of LeVoy D. Saltzman created this Life Tributes page to make it easy to share your memories.

A Funeral Service for LeVoy will be held on Wednesday, May 11,...