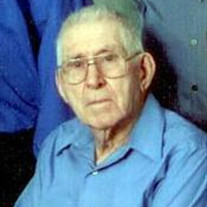 Lewis Earl McCreath was born at Thedford, Nebraska on August 1, 1917 to James Lewis and Velora Gertrude (Losh) McCreath. He went to Calf Creek country school and graduated from Thedford High School. He married Helen Adala Zeller on December 25, 1939. To this union two children were born; Sandra Cheryl and Susan Carol. In 1941, Lewis and Helen moved to Omaha where Lewis attended welding school. After graduation he worked for Omaha Steel Works. In 1942 the couple moved to Illinois where Lewis was employed as a welder in a Senica shipyard. In 1943 they moved back to Thedford, Nebraska and ranched with Lewis' father until 1954 when they moved to Fairmont, Nebraska. Lewis spent the majority of his remaining working-years as a self employed building contractor. He was a master carpenter building custom homes from start to finish, including plumbing and electrical work. Lewis built many homes in the Fairmont area. In his retirement years he enjoyed working in his shop making many different wood crafts which Helen would decorate. They sold these unique items at area craft shows. He enjoyed square dancing, camping, boating, cards and board games with friends. They were members of the Good Sam Club traveling to many annual Samborees to meet with fellow campers. For 10 years they provided their camper as a support vehicle for the Special Olympics Torch Run. They enjoyed spending the winter months in Harlingen, Texas where they had many friends and a warmer climate. Lewis' greatest joy was his family, his Children, Grandchildren and Great Grandson. He always enjoyed attending his Grandchildren's varied school activities. Lewis was a talented inventor. If he needed a tool to fit a particular task he made it, usually out of wood. At the end of his life, his shop had many 'invented' tools in it but only he knew what their intended use was. He is survived by his wife Helen of Fairmont, NE, his children Sandra Dittbrenner and husband Ken of Denton, NE; Susan Frazier and husband Richard of Fairmont, NE; Grandchildren: Shawn Frazier, wife Barbi and their son Kellen of Castle Rock, CO; Sheri (Frazier) Kesner and husband Gerry of Lakewood, CO. Lewis passed away Sunday, February 3, 2013 at Fairview Manor, Fairmont, NE. Graveside services for Lewis were held on Thursday, February 7, 2013 at 1:00 p.m. at the Purdum Cemetery in Purdum, Nebraska. Pastor Ralph McKay officiated the services. Memorials for Lewis are directed to the Fairview Manor or the Purdum Cemetery Association C/O of the Harsh Mercantile, 84453 Purdum Ave Purdum, NE 69157. Farmer & Son Funeral Home in Geneva was in charge of arrangements.

The family of Lewis Earl McCreath created this Life Tributes page to make it easy to share your memories.

Lewis Earl McCreath was born at Thedford, Nebraska on August...

Send flowers to the McCreath family.