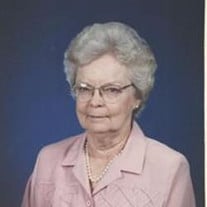 Lila Mae Bettger was born the first of four children to George Edward Lovegrove and Alice Mae (Ainsworth) Lovegrove December 11, 1925.  She passed away April 18, 2014 at the Fairview Manor in Fairmont, Nebraska at the age of 88 years 4 months and 7 days.  Lila was born and raised on the family farm northwest of Geneva where she attended country school at District 14, later graduating from Geneva High School in 1943.  She taught rural District 81 and District 66 after attending a summer session at the University of Nebraska.  On May 26, 1946 Lila married Robert Bettger at the United Methodist Church in Geneva, Nebraska and to them three sons were born.  Their first twenty-five years were spent on the farm northwest of Fairmont.  In addition to raising a family, Lila always had a big garden and fed any hired men who came to put down irrigation wells or help with the farming.  In 1971 they built a new home in Fairmont.  Shortly after that her health began to fail.  Robert and Lila spent several winters in Phoenix, Arizona and traveled around the continental United States and Hawaii.  Lila was a member of the Fairmont Community Church, Chapter AM, P.E.O, Bookworms and a past member of the Woman’s Club and a bridge club.  She enjoyed doing genealogy and spent many, many hours researching and studying genealogy.   Lila was a devoted wife, mother, grandmother and great grandmother.  She was preceded in death by her parents George and Alice Lovegrove, brother Dale, sister Marjorie Burt and brother-in-law Keith Burt.  She is survived by her husband Robert; sons Robert E. and wife Sandra of Fairmont, William D. and wife Susan of Geneva and Paul E. and wife Carol of Fairmont, brother Robert D. Lovegrove and wife Shirley of Fairmont, sister-in-law Jean Lovegrove of Fairmont, eight grandchildren and 11 great grandchildren and numerous relatives and friends.  Funeral services were conducted at 10:30 a.m., Tuesday, April 22, 2014, at the Fairmont Community Church in Fairmont, Nebraska with Rev. Karla Scheffy officiating.  Nancy Jo Galusha accompanied Jonathan & Lauren Boyer who sang “Nearer My God To Thee”. Nancy Jo also accompanied the congregation who sang “How Great Thou Art” and “The Old Rugged Cross”. Casket bearers were Jeff Bettger, Scott Bettger, Matt Bettger, Eric Bettger, Dean Acheson, Darin Erstad, Wade Lancaster and Brent Parsons. Interment was in the Fairmont Public Cemetery with Farmer & Son Funeral Home in charge of arrangements.  Memorials are directed to Fairmont Community Church or the Fairview Manor.

Lila Mae Bettger was born the first of four children to George Edward Lovegrove and Alice Mae (Ainsworth) Lovegrove December 11, 1925.  She passed away April 18, 2014 at the Fairview Manor in Fairmont, Nebraska at the age of 88 years 4 months... View Obituary & Service Information

The family of Lila M. Bettger created this Life Tributes page to make it easy to share your memories.

Lila Mae Bettger was born the first of four children to George...