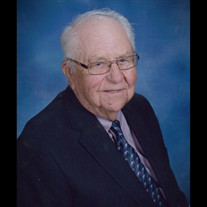 Linus Joseph Kamler (94), Geneva, was called to be with God on July 11, 2018, at the Fillmore County Hospital surrounded by his family. Linus was born on June 4, 1924, on the family farm, about nine miles northwest of Shickley, NE. He was baptized on June 8, 1924, received First Holy Communion on June 5, 1932, and was confirmed on November 4, 1936 at St. Mary’s Catholic Church in Turkey Creek. He was the oldest of four children born to Joseph and Hattie (Volkmer) Kamler. Linus was a graduate of Geneva High School in 1941, and learned his love for the land during childhood while doing chores with his father on the farm. In 1945, he was drafted into the Army and served one year in Japan as a member of the occupying forces during World War II achieving the rank of Sergeant. He married Frances Madeline Zieren on April 18, 1953. They began their life together by moving in with his parent’s, sharing households, until his parents home was finished and they could move to Geneva. In the early 1960’s, given the nickname “Poncho,” Linus played 2nd base on the Shickley Schlitzsoftball team. He never advanced to free agency so he just remained on the farm. Linus has been a long time member of St. Mary’s Catholic Church in Shickley where he served on the church board. He served on the Shickley Public School Board and helped initiate the Shickley Future Farmers of America and Vocational Agricultural Program during his tenure. After moving to Geneva in 2001, he became a member of St. Joseph’s Catholic Church. Linus was an Archer Oil Lubricant Dealer for over 20 years. He was a member of the Lions Club, a lifetime member of the Shickley American Legion Post #164, and a lifetime member of the Geneva VFW Post #7102. Linus' passion was farming, nurturing the land and livestock, and frequenting the sale barns to buy cattle. He was looking forward to the Fillmore County Fair this year when the family will be receiving the 2018 Nebraska Pioneer Award. This award recognizes the family farm, which has been owned and farmed by the Kamler family for 100 years. Later in life, he enjoyed daily coﬀee at the elevator discussing important subjects such as the grain markets and town news, while comparing the latest crop technology innovations to their own tried and true methods of farming. He frequently joined the local card game at the VFW, where he would win, and sometimes lose the “grocery money.” Linus never met a stranger and enjoyed the art of conversation, leaving everyone feeling welcomed and having made a new friend. Linus had a mischievous streak and a great sense of humor. Frances always smiled at his daily greeting to her, “Good morning sunshine.” He was a beloved and devoted husband, father, father-in-law, and grandfather. He was loved by many and will be forever missed. Linus was preceded in death by his parents Joseph and Hattie Kamler; brother Cletus Kamler and wife Rose; sister Jeanene Bahe and husband Marlin; and brother-in-law John Aksentowitz. He is survived by his wife Frances of 65 years; his children Susan Kamler (Linda) of Denver, CO; Steven Kamler (Ann), Joseph Kamler (Gina), Patrick Kamler (Renae) all of Shickley, NE; his grandchildren Amanda Williams (Laron), Andrew Kamler (Kristin), Courtney, Isaac, Josiah, Macy, and Levi Kamler, Madeline and Malinda Kamler; his great grandsons Andrew, Abram, and Adlai Williams; his sister Kathleen Aksentowitz of Omaha, NE; and numerous nieces and nephews. A Funeral Mass for Linus was held on Saturday, July 14, 2018 at 10:00 a.m. at the St. Joseph’s Catholic Church in Geneva. Father Harlan Waskowiak was the Celebrant. Carol Grote was the organist and Charlotte Bumgarner was the Cantor. Together, they led the congregation in singing “Be Not Afraid,” “Here I Am Lord,” and “City Of God.” Led by Carol, Charlotte also sang “On Eagles’ Wings” during Communion. Pallbearers for the service included Steven Kamler, Joseph Kamler, Patrick Kamler, Isaac Kamler, Josiah Kamler, Levi Kamler, and Drew Kamler. Honorary Bearers included Amanda Williams, Courtney Kamler, Macy Kamler, Malinda Kamler, and Madeline Kamler. Interment was held in the St. Joseph’s Catholic Cemetery. Military Honors were performed by the Shickley American Legion Post 164 and the Nebraska Military Honor Guard. Farmer & Son Funeral Home of Geneva was in care of the arrangements and online condolences can be left at www.farmerandsonfuneralhome.com. In lieu of flowers, memorials may be made to the 50 Flags Memorial or to the Fillmore County Hospital Foundation Community Drive.

Linus Joseph Kamler (94), Geneva, was called to be with God on July 11, 2018, at the Fillmore County Hospital surrounded by his family. Linus was born on June 4, 1924, on the family farm, about nine miles northwest of Shickley, NE. He was baptized... View Obituary & Service Information

The family of Linus J. Kamler created this Life Tributes page to make it easy to share your memories.

Send flowers to the Kamler family.