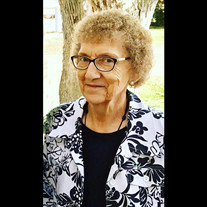 Lois Marie (Rager) Klipp was born to Dale and Clara (Jurgensen) Rager on June 24, 1938, at the family farm south of Ashland, Nebraska. She passed away on Friday, November 25, 2016 at the Fairview Manor in Fairmont, Nebraska at the age of 78 years, 5 months and 1 day. She was baptized at the Congregational Church in Ashland, Nebraska. She attended country school at the Wann Grade School near Wann, Nebraska, and graduated from Ashland High School in Ashland, Nebraska. She married LaVern Klipp on September 8, 1956, at the Trinity Lutheran Church near Ashland, Nebraska and to this union were born three sons and one daughter. They lived on a farm near Murdock, Nebraska, where LaVern farmed with his father until 1959. In March of 1959, they moved to a farm near Grafton, Nebraska and lived on the farm until 1971 when they moved to town and their current home in Grafton. Lois worked as the cook at Grafton Elementary School for several years. She began working at Tony's Bar & Grill in Grafton in 1972 where she worked until her retirement in 2005. She enjoyed serving and getting to know her many regular customers at Tony's. She served on the Fillmore County Election Board for several years, was a member of the Fillmore County Hospital Auxiliary, served as Secretary for the Grafton Community Improvement Club, and was a member of the Trinity Lutheran Church in Grafton. She enjoyed visiting with neighbors and friends at the Mini-Mart in Grafton. She was an excellent cook and baker and took pleasure in cooking and baking for her family and friends. Her children and grandchildren often made requests for her many "specialties" and she spent numerous hours preparing everyone's favorite pies, cookies, rolls, and desserts for every family gathering and special occasions. She loved baking cookies for her grandchildren. She also loved gardening and taking care of the lawn, If Les could keep the mowers running for her. She is survived by son Larry and wife Linda of Fairmont; son LeRoy of Hampton; son Les and wife Jenny of York; daughter Lorraine Lusk and husband Tom of Waverly, Kansas; granddaughter Kylie Kallhoff of Seward; grandson Greg and wife Kristina of Hampton; grandson Tim and husband Joseph of Alexandria, Virginia; grandson Jonathan and wife Morgan of Lincoln; grandsons Jason and Zackery Lusk of Waverly, Kansas; and great-grandsons Creighton, Kyler and Cooper Kallhoff; great-grandson Hayden Klipp; great-granddaughter Tinsley Klipp; great-grandson Hudson Klipp; and many special friends and wonderful neighbors. She was preceded in death by her husband, LaVern; her parents, and her sister, Rose Mary Rager, who died in infancy. Funeral services for Lois were held on Wednesday, November 30, 2016 at 10:30 a.m. at the Trinity Lutheran Church in Grafton, Nebraska. Pastor Stephen Kruschel officiated the service. Sue Baumann accompanied the congregation in the singing of “Amazing Grace” and “The Old Rugged Cross.” Pallbearers for the service included Mike Holland, Kurt Kleinschmidt, Max Miller, Jim Baumann, Kevin Davis, and Rick Griess. Interment was held in the Grafton Public Cemetery following the funeral service. Farmer & Son Funeral Home conducted the services. Online condolences may be left at www.farmerandsonfuneralhome.com Memorials are directed to the Trinity Lutheran Church.

Lois Marie (Rager) Klipp was born to Dale and Clara (Jurgensen) Rager on June 24, 1938, at the family farm south of Ashland, Nebraska. She passed away on Friday, November 25, 2016 at the Fairview Manor in Fairmont, Nebraska at the age of 78... View Obituary & Service Information

The family of Lois M. Klipp created this Life Tributes page to make it easy to share your memories.

Send flowers to the Klipp family.