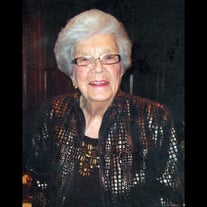 Lois Ann Kuska of Burress area passed away on October 17, 2017 at the age of 94 years 11 months, 6 days. She was born November 11, 1922 in Dannebrog, Nebraska to Jens Peter and Louise (Christensen) Jacobsen. Lois Ann was baptized and confirmed in the Lutheran faith. She attended Dannebrog Public Schools. Upon graduation in 1939, she attended the University of Nebraska Lincoln for two years where she took pre- med courses. In 1942, she enrolled in the Sophie Teters School of Nursing at Lincoln General. During those war years, a student nurse was given many patients to care for. After graduation (RN) in 1945, Lois worked as an RN supervisor at Lincoln General and later a nurse for an Orthopedic Surgeon. During training, Lois had a special course at Hastings Hospital. It was in Hastings that she met Mel Kuska, who was a Lieutenant at Harvard Air Base. He was sent overseas and they met again in July of 1946. They were engaged in 1947 and married at Dannebrog on August 10, 1947. They settled on the farm where Lois lived a happy life. They traveled to all the U.S.A. states with several trips to Europe. They especially enjoyed Czechoslovakia and Denmark ancestor excursions. They were blessed with three children: Paul, Carol, and Kathy, and they added much joy to her life. Lois Ann belonged to many organizations. She was a 60+ year member in the United Church of Christ, American Legion Auxiliary, Eastern Star Chapter 41, UNL Alumni Association and Woman’s Club. She was also a P.E.O. member. Lois Ann enjoyed several Bridge clubs and she valued her close friendships, especially with the Burress Belles Ladies. She was preceded in death by her loving Husband, Mel; parents J.P. and Louise Jacobsen; sister Genevieve (and Hans) Hoiberg; Brother James (and Wauneta) Jacobsen; Parents-in-law Emil and Katherine Kuska; and Brother-in-law Donald (and Camille) Kuska. She is survived by children Paul Kuska (Fairmont), Carol (Neil) Leipzig (Salem, WI) and Kathy Kuska (Omaha); grandchildren: Gena (Aaron) Dalan (Centralia, WA), Chris Leipzig (Salem, WI), Paul (Maggie) Homer (Seattle, WA) , Ben Homer (fiancé Megan Palmer)(Omaha), and Scott Homer (Omaha); Great Grandchildren: Soren Dalan, Julia Dalan, and Evelyn Homer; nieces and nephews and many friends. A Funeral Service for Lois Ann was held on October 21, 2017 at 10:30 a.m. at the Exeter United Church of Christ. Pastor David Coleman officiated the service. Mike Zeleny accompanied Greg Rehm who sang “At The End Of the Road” and “His Hand In Mine.” He also accompanied the congregation in the singing of “On Eagles’ Wings.” Pallbearers for the service included Gena Dalan, Chris Leipzig, Paul Homer, Ben Homer, and Scott Homer. Interment was held in the Bohemian National Cemetery in Milligan, Nebraska. Farmer Funeral Home in Exeter, Nebraska conducted the services. Online condolences may be left at www.farmerandsonfuneralhome.com. Memorials are suggested to the Exeter United Church of Christ, Exeter Rescue Squad, or the Exeter Women’s Club.

Lois Ann Kuska of Burress area passed away on October 17, 2017 at the age of 94 years 11 months, 6 days. She was born November 11, 1922 in Dannebrog, Nebraska to Jens Peter and Louise (Christensen) Jacobsen. Lois Ann was baptized and confirmed... View Obituary & Service Information

The family of Lois Ann Kuska created this Life Tributes page to make it easy to share your memories.