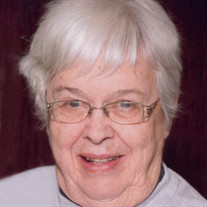 A Funeral Service for Lola was held on Monday, November 26, 2018, at 10:30 a.m., at Trinity Lutheran Church in Bruning, Nebraska, with Pastor Stuart Sell presiding. Organist, Janice Fintel, accompanied the congregation as they sang, “Take My Hand, Precious Lord”, “Beautiful Savior” and “What A Fellowship, What A Joy Divine”. Lola’s son-in-law, Sam Packard, played “Amazing Grace” on his Violin during the funeral service. Pallbearers included David Swanson, Mark Wilkening, Taylor Dirks, Daniel Vinkenberg, Larry Garland and Allan Garland. Honorary pallbearers were Lola’s grandchildren; Bethany Swafford, Halsey Gorecki, Mollie Packard, Oliver Packard and Evelyn Packard and her great-grandchildren; Mallory Bechtold, Tayvin Dirks, Lucas Dirks, Aiden Gorecki, Dirks Swafford and Adalynn Gorecki. Graveside Services were conducted from the Trinity Lutheran Church Cemetery in Bruning, Nebraska following the funeral service. Memorials were directed to the family for a later designation in Lola's Memory. Farmer & Son Funeral Home was in charge of funeral arrangements. Lola Ann (Wilkening, Dirks) Johnson was born to Edward and Alma (Finke) Wilkening on June 27, 1939 in Alexandria, Nebraska. Lola died on November 20th, 2018, at Bryan West in Lincoln at the age of 79. She was surrounded by her family. Lola was baptized in July of 1939 and confirmed in 1953 at Trinity Lutheran Church in Bruning. In 1956 she graduated from Bruning Public School. She then moved to Lincoln where she attended Lincoln School of Commerce and worked at Walgreens on O St. She was drawn back to the Bruning area by her sweetheart Donald Dirks. Don and Lola married on May 3, 1957 at Grace Lutheran Church near Ohiowa. She was highly involved in the family auctioneering and real estate business, drove school bus, cooked at school and was a teachers’ aid. Lola was an active member in Trinity Lutheran Church. She was a past President of the Nebraska Auctioneers Auxiliary and past President of Bruning General Federation of Women’s Club. She was a member of Circle 2 of Trinity Lutheran, Bruning Alumni Association, and Ladies Aid of Grace Lutheran. After the death of their oldest daughter, Deb, Don and Lola started Compassionate Friends group in Geneva, for parents experiencing the death of a child. She taught confirmation classes, provided transportation for young and old, was a church organist in the area and wrote the local Bruning news for area papers for many years. Lola was a Homeless Connect volunteer for 9 years. She also volunteered in the fundraiser for the Nicaragua Mission Team in Hastings for several years. She was called upon to coordinate meals after the 1984 tornadoes struck the community. Lola bravely fought cancer more than once. Due to failing health she moved to Lincoln and resided at The Legacy Terrace. The friendship and care she received prior to and during this time were a blessing. She had her motto: “Life’s not fair, but God is good,” to help remind herself and others during the tough times. Lola’s greatest enjoyment was her grandchildren and great grandchildren. The annual family vacation to places such as Minnesota and South Dakota were treasured by her. As her family grew, the yearly family weekends at the cabooses, or a cabin, were thoroughly enjoyed. She had a special gift in remembering others with cards and flowers on many occasions. Lola’s humor rarely lapsed and came out most frequently when around her close friends and family. Lola had many interests and talents in her life; a love for music of any form, enjoyed playing cards, games and doing puzzles. Socializing was very important, the coffees and visits throughout her whole life were memories she treasured. Her favorite teams were any that her kids or grandkids played on, the local high school sports teams, and Husker volleyball. Quilting, embroidery and writing calligraphy were often passed on as gifts. Lola was married to Vernon Johnson of Bruning on December 24, 1988. They spent endless hours creating beautiful woodworking pieces, which can still be seen around Bruning. Together they took pleasure in sitting on the deck, playing cribbage, and frequenting Betty’s Place. Preceding her in death were her parents, husbands, daughter, Deb, brothers, Dale and Roger, and sister, Kathy. She is survived by son, Dean (Michelle) Dirks, Bruning; daughter, Deanna Dirks, Hastings; daughter, Denise (Sam) Packard, Lincoln; Stepson, Bill (Joni) Johnson, Omaha; Stepdaughters: Marjorie (Bob) Bedlan, Shickley; Colleen Wiedel, Lafayette, IN. Sister, Nancy (Bob) Swanson, Waconia, MN; Sister in laws, Linda (Wilkening) Anderson, Trish Wilkening, Verienne Hulse and Dolores Johnson; Grandchildren: Bethany (Jason) Swafford, Taylor (Brooke) Dirks, Halsey (Matt) Gorecki, Amalia Packard, Oliver Packard, and Evelyn Packard. Great Grandchildren: Mallory, Tayvin, Lucas, Aiden, Dirks, and Adalynn. Also surviving are some very dear nieces, nephews, cousins and friends.

The family of Lola A. (Dirks) Johnson created this Life Tributes page to make it easy to share your memories.