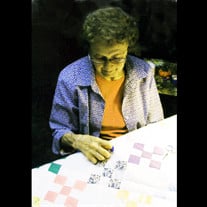 Lola Mae Kennel was born on November 3, 1919 to Jacob and Lavina (Miller) Stauffer in Seward County near Milford, Nebraska. The Lord called her home on November 16, 2019, at the age of 100 years, 13 days. Lola attended country school near Milford eight years. She accepted Christ in her youth and was baptized at East Fairview Mennonite Church. She was deeply committed to the Lord and made it a priority to pass on the Christian faith to her family as well as others in the church and community. She wanted to go to high school but her family needed her to help at home. Lola spent several years working at home and in Milford. During the late 1930's, she spent time working in lllinois and Iowa. On January 8, 1941, Lola married Lester Kennel of Strang, Nebraska. At that time, she became a member of Salem Mennonite Church at Shickley, Nebraska. Lola had a great concern for the spiritual well being of her family. Lola's passion was to love and provide for family, cook tasty food, entertain and keep a very clean house. She loved growing flowers, tending a large garden, and canning the produce. Her love of sewing and quilting provided many items for the MCC relief sale, serving mission causes around the world. She spent a lot of time supporting the life of the church. Lola made many afghans for the prayer shawl ministry at Salem. She was a life long member of the women's sewing group at church. Lester and Lola had two sons, Ronald and Cecil and one daughter Debra. Lester and Lola lived their entire married life in the Strang community, where they were engaged in farming and livestock production. They enjoyed many trips to the Holy Land, Europe, Mexico, and in the U.S. Lester passed away July 11, 2004, so Lola was left living alone for many years but made the best of it. She prayed a lot for her family and could be heard singing a lot as she worked. Her faith in Jesus Christ was her solace. She moved to Heritage Crossings January 2, 2016 when her eye sight and health began to fail. She was an active resident until her death. Lola was preceded in death by her husband Lester; her parents Jacob and Lavina Stauffer; sisters lone (Perry) Schweitzer, Ruth (Lyle) Schweitzer; brothers, William (Virginia) (Carol) Stauffer, Vern Stauffer, and Wallace (Edna) Stauffer. Lola is survived by son Ron and wife Judy Kennel of Goshen, Indiana, Cecil and wife Sharon Kennel of Strang, Nebraska, and daughter Debra and husband Mike Jaberg of Strang, Nebraska; five grandchildren Steve (Chris) Kennel, Anne Arp, Doug (Serena) Kennel, and Angela (Steve) Nitzsche, Kristine (Travis) Kliewer; eight great grand children Kristopher Nitzsche, Benjamen Nitzsche, Lara Kliewer, Alyssa Kennel, Elle Arp, Corbin Gibson, Harliegh Gibson, Hunter Gibson; sister-in-law Lucille Stauffer and many nieces and nephews. A Funeral Service for Lola was held on Tuesday, November 19, 2019 at 10:30 a.m. at Salem Mennonite Church, rural Shickley, Nebraska. Pastor Shawn Nolt officiated the service. Jenny Eichelberger was the pianist and Don Kempf was the song leader and they led the congregation in the singing of “To God Be The Glory,” “When We Walk With The Lord,” and “Nearer To The Heart Of God.” Pallbearers for the service included Ron Kennel, Cecil Kennel, Doug Kennel, Steve Kennel, Mike Jaberg, Travis Kliewer, and Steve Nitzsche. Interment was held in the Salem Cemetery immediately following the Funeral Service. Farmer & Son Funeral Home was in care of the arrangements and online condolences can be left at www.farmerandsonfuneralhome.com Memorials are suggested to the Salem Mennonite Church & Missions.

Lola Mae Kennel was born on November 3, 1919 to Jacob and Lavina (Miller) Stauffer in Seward County near Milford, Nebraska. The Lord called her home on November 16, 2019, at the age of 100 years, 13 days. Lola attended country school near... View Obituary & Service Information

The family of Lola M. Kennel created this Life Tributes page to make it easy to share your memories.