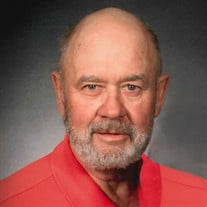 A Memorial Service for Lonnie Kennel was held on Thursday, June 3, 2021 at 11:00 a.m. at Christ Lutheran Church in Davenport, Nebraska. Pastors Beth Roegner and Chris Lake officiated the Memorial Service. Deb Johnson accompanied the congregation in the singing of “Blessed Assurance” and “I Was There To Hear Your Borning Cry.” She also accompanied Madison Martin in the singing of “Amazing Grace.” Honorary Pallbearers for the service were Mike Kleppinger, Joe Balk, Jason Hendrickson, John Lott, John Eberly, Jim Manes, Pierre Kennel, Lance Kennel and Reid Hooper. A private entombment of ashes took place in the Geneva Public Cemetery. Memorials are suggested to the Mission of Mercy Free Dental Clinic. Lonnie Wayne Kennel was born on May 6, 1947 in Geneva, Nebraska to Wayne L. and Betty J. (Schweitzer) Kennel. He was the oldest of three children. He grew up on the family farm in Shickley and graduated from Shickley High School in 1965. Lonnie attended two years at Hesston College, Heston, Kansas and completed his undergraduate degree at the University of Nebraska, Lincoln, Nebraska. He was accepted into the College of Dentistry, UNL, where he graduated in 1972 with a Doctorate of Dentistry. During his tenure at UNL, he met the love of his life Marsha Lorraine Jensen. One week following graduation, they were wed on May 27, 1972 in Denver, Colorado. The couple established their home in Geneva, Nebraska. They were blessed with two children, Kirk A. Kennel and Kate A. (Kennel) Manes. Lonnie loved his family and enjoyed every moment he spent with his grandchildren. Dr. Lonnie and Marsha Kennel maintained his dental practice for over 30 years in Geneva, Nebraska. Lonnie loved being a dentist. He often used his dental practice to share his faith and love of the Lord with others. He was a dentist for the Mission of Mercy, a nonprofit organization that provides free dental care on weekends for needy Nebraskans. He traveled to the Peoples Health Center in Lincoln and provided dental care to those who needed dental care. He donated his time, skills, and supplies while being able to share his faith. One of his proudest moments as a dentist was in 2010, when he was nominated and inducted into the American Society of Dental Ethics, an organization whose purpose is upholding the integrity and honor of the dental profession. Lonnie carried his love for the Lord in other areas of his life. He taught Sunday School, Bible Studies, and eventually he became a Parish Ministry Associate for the Evangelical Lutheran Church of America. Lonnie loved fishing, golfing, and spending time with his friends and family. The annual trip to Canada with his dental buddies was a favorite. He enjoyed the many shore lunches, card games, and the genuine comradery. He enjoyed being at his cabin at Morning Star Lake and later at Long Lake 2, Backus, Minnesota where he would grill burgers, water ski, and enjoy his children. Lonnie enjoyed golf and played on leagues with his father, Dave Eberly, Pastor Lake and many other friends along the way. Anyone who knew Lonnie, knows that he enjoyed a good meal (and maybe a beer or two) at home, at a local diner, or a five-star restaurant with his family and friends. He may not have remembered the location, but he could always tell you what good beer was served. Lonnie Wayne Kennel entered his heavenly home on May 20, 2021. His parents, parents-in-law, several aunts, uncles, and cousins preceded him in death. Those left to cherish his memory are his wife of 49 years, Marsha Kennel of Davenport, Nebraska; his son, Kirk Kennel of Davenport, Nebraska; daughter, Kate A. (Jim) Manes of Davenport, Nebraska; grandchildren, Noah, Ben, Jackson, Ellie, and Leah; brother, Victor (Wanda) Kennel of Texas; sister, Victoria (Tom) Bassett of California; many nieces and nephews; and grandchildren in his heart Britney, Reed, Elizabeth, Hanna, and Clara.

The family of Lonnie W. Kennel created this Life Tributes page to make it easy to share your memories.

A Memorial Service for Lonnie Kennel was held on Thursday, June...