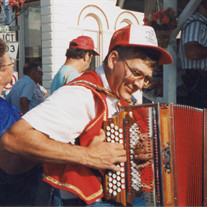 Loren G. Skrivanek was born to Leslie and Dorothy (Vnoucek) Skrivanek on November 13, 1947 at Friend, Nebraska. He passed away March 28, 2016 at Bryan LGH East Hospital in Lincoln, Nebraska at the age of 68 years, 4 months, and 15 days. He was the oldest of three children. Loren attended Milligan Public Schools and graduated with the class of 1966. After high school, he attended the University of Nebraska and Fairbury Junior College, receiving his associate’s degree. He worked with Curly Kotas as an electrician in Milligan. He later started his own business called Milligan Electric. Loren played trombone in many bands including his high school band, Dominant Trait, University of Nebraska Concert Band, ROTC Band, Fairbury Tijuana Brass Band, Navy Band, Milligan Legion Brass Band, and his very own Loren Skrivanek Trio. In 1970, during the Vietnam War, he volunteered for the Navy. He had the honor of being presented a certificate for serving with distinction in the U.S. Navy Band. During his three years of Navy duty, he was stationed at the Amphibious Base in Little Creek, Virginia, and assigned to the Naval Undersea Warfare Group. He spent time in Panama, and then returned to Little Creek and was chosen to go on a North Atlantic cruise operation on the USS O’Hare involving all the NATO powers. When crossing the Arctic Circle, all Navy men became Blue Nose, a sacred initiation when a Navy member crosses the Artic Circle. Petty Officer 3rd Class Loren Skrivanek received his honorable discharge on July 21, 1973. After returning home, Loren restarted his electric business, along with the Loren Skrivanek Trio, and farming with his father. In September of 1983, Loren married Julie Sellenrick, whom he had known during his college days. To this union a daughter, Shannon, was born. In 2001, Loren went on a tour to the Czech Republic, Hungary, Germany, and Poland. It was in Poland that he had the tour of the German Concentration Camps. Loren worked for his special friend, Phyllis Sabata, at P&J records. They traveled all over the United States to Polka Festivals selling CD’s, tapes, and other Czech products. After all the years of traveling, the decision was made to sell the business. He then made a CD with the Loren Skrivanek Trio, with Loren on Accordion, Johnny Halama on drums, and Frank Kassik on bass. The accordion Loren played in his band was specially built to his specifications in Gowanda, New York. Alan Shimanek of Walker, Iowa tuned the accordion into a low key for Loren. Loren had a rare musical talent. His mother, Dorothy, taught him to sing in Czech, many of the Czech numbers. Loren was inducted into the Milligan Musicians Hall Of Fame in February of 2006. His father, Leslie, and grandfather, Joe Vnoucek, were also both in the Hall of Fame. Loren also belonged to the Milligan American Legion Post 240, Masonic Lodge, Elks Lodge, VFW, and Lincoln Czech Club. His father, Leslie, preceded him in death. Loren is survived by his daughter, Shannon Skrivanek of Washington State; life mate Phyllis Sabata of Lincoln, Nebraska; mother Dorothy Skrivanek of Milligan, Nebraska; brother Alan Skrivanek of Columbus, Nebraska; sister Debra Hall of Lincoln, Nebraska; 4 grandchildren; a niece and 3 nephews; and aunts Arlene Kassik and Betty Soukup; and uncle Joe Vnoucek. Funeral services for Loren were held on Thursday, March 31, 2016 at 10:30 a.m. at the Milligan Auditorium in Milligan, Nebraska. Pastor Brian Kottas officated the service. Maureen Beck sang “Amazing Grace.” Randy Korbelik and Galen Beck were the accordionists and played “Deticky Jdete Uz Spat” (Go To Sleep My Children) and “Meadowlard Waltz” (Skrivanek Spival). Pallbearers for the service included Jeffrey Skrivanek, Jessica Hall, Michael Kassik, Dean Kassik, Bob Vnoucek, and Larry Urbanek. Honorary bearers included Jarod Skrivanek, Tyler Skrivanek, Ron Urbanek, Guy Urbanek, and James Sabata. Military Graveside services were held in the Bohemian National Cemetery, Milligan, Nebraska, with military rites performed by Milligan American Legion HSSK Post 240. Memorials are directed to the Milligan American Legion HSSK Post 240. Farmer & Son Funeral Home-Kotas Chapel was in care of the arrangements.

Loren G. Skrivanek was born to Leslie and Dorothy (Vnoucek) Skrivanek on November 13, 1947 at Friend, Nebraska. He passed away March 28, 2016 at Bryan LGH East Hospital in Lincoln, Nebraska at the age of 68 years, 4 months, and 15 days. He... View Obituary & Service Information

The family of Loren Skrivanek created this Life Tributes page to make it easy to share your memories.

Send flowers to the Skrivanek family.