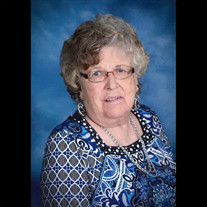 Lorene Marie (Bedlan) Hromadka was born to Felix Sr. and Mamie (Krupicka) Bedlan on December 14,1931 on a farm south of Friend, and passed away July 10, 2021 at Geneva, Nebraska at the age of 89 years, 6 months, and 27 days. Lorene grew up on the family farm where her father was born south of Friend. Lorene was the youngest child born to Felix and Mamie. She attended country school near her home and graduated from Milligan Public Schools with the class of 1949. While growing up, Lorene enjoyed the company and stories told in Czech by her fraternal grandmother, Meri Bedlan. Lorene was baptized at St. Wenceslaus Catholic Church in Milligan and remained a member till her death. Lorene pursued a teaching certification after graduation and taught in numerous rural schools prior to and after marriage. Lorene was united in marriage to Milo Hromadka on April 5, 1951. The couple made their home on the Hromadka family farm north of Milligan. They were blessed with the birth of two daughters; Jane Marie and Jacqueline Sue. Lorene helped Milo with the daily farming operations at their home and raising their two daughters. When her daughters began school, Lorene waitressed at local establishments in Milligan. Later, she was employed at Pizza Hut in Geneva until retirement. Lorene was an avid bowler and was a member of several championship bowling teams. She enjoyed collecting and decorating her home with antiques. Each holiday her home could be found with unique items that she had purchased at local shops and craft fairs. After retirement Lorene enjoyed traveling with her friends to Las Vegas, Florida and Washington D.C. Her catholic faith was present in her daily life and she often volunteered her time to the St. Wenceslaus Alter Society and cleaning the church. In their later years, she and Milo enjoyed going for drives around Fillmore County, visiting and leaving flowers at the cemetery. They could always be found each day having lunch and watching the noon news. Lorene’s greatest joy were her granddaughters, Jessica and Jenna. Together, Lorene and Milo attended many dance recitals and school functions. They enjoyed having the girls on the farm for long holiday breaks. Lorene liked having her granddaughters along for shopping trips and helping to decorate her home. Lorene would later look forward to visits and mail from her great-grandchildren. While still at home, Lorene continued to attend Sunday mass with the help of her special friend Ann Jansky. She enjoyed her weekly visits, from her Caring Friends assistant Lisa Paul. Lorene remained on the Hromadka family farm until March of 2020. She was currently residing at Heritage Crossings in Geneva. While at Heritage she enjoyed attending church services and watching rosary each day. Survivors include daughter Jane (Sam) Antholz, York; Granddaughters Jessica (Tucker) Reed, Flagstaff, Arizona and Jenna (Zack) Adamson, Seward; Great-Grandchildren Gabby and Grayce Reed, and Henry Adamson; sister-in-law Jean Bedlan; nieces, nephews, cousins and friends. Lorene was preceded in death by her husband Milo; daughter Jacqueline Sue; her parents Felix Sr. and Mamie Bedlan; and brother Felix Bedlan. A Funeral Mass for Lorene was held on Friday, July 16, 2021 at 10:30 a.m. at the St. Wenceslaus Catholic Church in Milligan, Nebraska. A Rosary preceded the Mass at 10:00 a.m. . Father Brendan Kelly officiated the Services. Karen Filipi accompanied the congregation in the singing of “Amazing Grace,” “Prayer Of St. Francis,” O Lord, I Am Not Worthy,” and “How Great Thou Art.” Pallbearers for the service included Tucker Reed, Zack Adamson, Rich Kassik, Bryce Kassik, Brent Kassik, and Scott Demmer. Interment was held in the Bohemian National Cemetery following the Funeral Mass. Farmer & Son Funeral Home was in care of the arrangements and online condolences can be left at www.farmerandsonfuneralhome.com Memorials are suggested to the St. Wenceslaus Catholic Church or the Heritage Crossings Nursing Home.

Lorene Marie (Bedlan) Hromadka was born to Felix Sr. and Mamie (Krupicka) Bedlan on December 14,1931 on a farm south of Friend, and passed away July 10, 2021 at Geneva, Nebraska at the age of 89 years, 6 months, and 27 days. Lorene grew up... View Obituary & Service Information

The family of Lorene M. Hromadka created this Life Tributes page to make it easy to share your memories.

Send flowers to the Hromadka family.