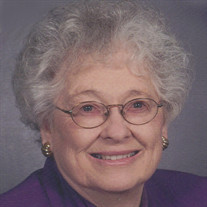 A Funeral Service for Lorene was held on Wednesday, July 10, 2019, at 10:30 a.m. at the Milligan United Methodist Church in Milligan, Nebraska with Pastor Murry Johnston and Kim Dunker presiding. Pianist, Mike Zeleny, accompanied the congregation as they sang 3 hymns “How Great Thou Art”, “Amazing Grace” and “God Be With You Until We Meet Again”. Mike Zeleny also accompanied Pastor Murry Johnston singing “My God and I”. Pallbearers included Ben Darnell, Cody Valentine, Rich Barak, Todd Cook, Gayle Becwar, Bill Slezak, Sam Zeleny and Max Zeleny. Honorary pallbearers were William Tesar, Louis Shafer, Del Tesar, Renye Tesar, Steve Kroll, Dan Tesar, Norman “Hoot” Tesar and Vern Johnson. Graveside Services were conducted following the funeral service at the Bohemian National Cemetery in Milligan, Nebraska. Memorials were directed to the Milligan Legion Auxiliary or Milligan United Methodist Church. Farmer & Son Funeral Home was in charge of funeral arrangements. Lorene Jean Tesar Zeleny, youngest daughter of James J Tesar and Barbara Becwar Tesar was born on March 19, 1931 in Saline County on a farm four miles East of Milligan and entered into eternal rest on Sunday, July 7, 2019 at the age of 88 years. Lorene graduated from Milligan High School in 1948, with a Normal Training teaching certificate enabling her to teach Fillmore County Rural School District #6, the same rural school she had attended as a child. During the summers, she worked at the ASCS farm office in Geneva and as a telephone operator at LT & T in Lincoln. She married Bernard Zeleny on April 19, 1951 in the little white Methodist Church in Milligan. They lived their entire married life of 68 years on a farm Northwest of Milligan. God blessed them with two precious children, Carol and Dave. Lorene was an active member of the Millligan United Methodist Church since 1953, serving in almost all elected and appointed offices; a sponsor for 12 years for MYF and Youth Choir, and Sunday School teacher for 14 years with perfect attendance. She was a charter member of the Friend Hospital Auxiliary. Lorene was a permanent member of the Milligan Legion Auxiliary Unit #240 serving in elected and appointed offices in the Unit, County and District 11. She serviced as Mother to the Junior Auxiliary at Girls State in 1977. In 1975, she became a charter member of Bleu Valle Salon #76. In 1987, she was selected as Departmental Child Welfare Chairperson; she traveled the State of Nebraska visiting the Salons and she used magic to help emphasize her speeches on children with cystic Fibrosis. In 1951, she became a member of Friendship Temple #20 of the Order of the Pythian Sisters, serving in all officer chairs, attaining Most Excellent Chief and later as District Most Excellent Chief. She enjoyed many happy times with the Country Girls of ’48; members of the Milligan Seniors and the bowling team of Bunker’s Inn. As a member of the Legion Auxiliary Kitchen Band, she enjoyed dressing up as a clown, Santa, bum, hillbilly and Easter Bunny, bringing joy to others, especially at care homes. Bernard and Lorene traveled all over America with the Becwar’s and the Geneva State Ambassador Club making lasting friendships. In 2001, when she became visually impaired she became a member of the South Central Support Group at Shickley and also became Region #5 Representative on the Nebraska Board for the Visually Impaired serving in leadership and speaking positions. She never missed the Tesar Christmas. She felt like her cousins were close family. She was thrilled being a tele-care Grammie to the 5th Graders of Exeter-Milligan School Lorene was a loving wife, a devoted mother, grandmother and great-grandmother and a beloved friend. Her favorite times were when her family gathered together at the farm home. In her younger days, she loved to take care of vegetable and flower gardens; can and freeze her bounty; bake crescent rolls, pies and cinnamon rolls; raise chickens, ducks, turkeys and geese. She loved to walk in the country with her dog, Louie; read newspapers and listen to the world and local news on TV; and she didn’t want to be disturbed when she listed to the “soaps”. She was a “die-hard” Democrat, serving on the Election Board from 1951 to 2002 until her eyesight failed. Lorene will always be remembered by her warm, caring hugs, her constant smile and loving messages enclosed in everyone’s greeting cards. Lorene was preceded in death by: her parents, James J and Barbara Tesar; her husband’s parents, Mike and Frances Uldrich Zeleny; sister, Arlene and husband, Ralph Hromadka; and brother-in-law, Bob Zeleny. She is survived by her husband of 68 years Bernard; children: daughter, Carol and husband, Patrick Darnell of Lincoln; son, David of Milligan; grandchildren: Heather and husband, James Liggett of Kansas; Benjamin Darnell of Tucson, Arizona; Laura and husband, Cody Valentine of Beatrice; and Kristen Zeleny of Lincoln; great grandchildren: Aurora and Henry Liggett and Boston Donovan Zeleny; sister-in-law, Diane Zeleny; Soul Sister, Cheryl Tesar; Personal Adopted Sister, Jean Jacobsen; Niece, Barbara Hromadka and family; Nephews: Jim Zeleny and family; Mike and Amy Zeleny and family; and Jeff Zeleny.

The family of Lorene J. Zeleny created this Life Tributes page to make it easy to share your memories.

A Funeral Service for Lorene was held on Wednesday, July 10,...

Send flowers to the Zeleny family.