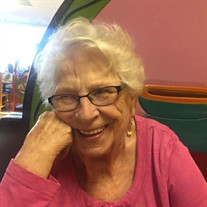 A Memorial Service for Loretta Irene was held on Saturday, July 11, 2020 at 11:00 a.m., at the Fairmont Community Church in Fairmont, Nebraska with Pastor Seungli You presiding. There were 3 recorded songs for the service, “Amazing Grace” by Judy Collins, “In The Arms Of An Angel” by Sarah McLachlan and “Somewhere Over The Rainbow” by Israel Kamakawiwo’ole. Honorary Urn bearers included Irene’s grandsons; Spencer Martin, Karl Sievert, Chris Christensen and Ryan Christensen. Private Family Inurnment took place following the memorial service at the Graceland Cemetery in Shelby, Nebraska. Memorials were directed to the family to be designated at a later date. Farmer & Son Funeral Home was in charge of funeral arrangements. It is with heavy hearts that the family of Loretta Irene Sievert announce her passing on July 3, 2020, at the age of 87. Irene, as she was best known, was born to Opal (Roach) and John Gillham on June 25, 1933, and is the oldest of four siblings. Irene will be lovingly remembered by the family she left behind, including her oldest daughter Debbie (Dick) Christensen, all three of her siblings, Rolly (Sieta) Gillham, Jeanette Stahlnecker, her half-sister Pat (Russ) Dowty—as well as many grandchildren, great-grandchildren, great-great-grandchildren, nieces, and nephews. Irene was preceded in death by her parents, her husband Jerry, her daughter Karla, her son Doug, and her step-son Chuck. Always the caretaker, Irene was a strong woman who loved her family unconditionally. Her strength and influence is woven through her family—as well as through the troubled teenage girls she helped during her more than 20 years as a cottage mother at YRTC in Geneva, Nebraska...a job which she loved. Irene also ran a lucrative Avon business for most of those 20 years. In her spare time, Irene loved to upholster furniture, garden, follow Nebraska football, and generally keep busy with a variety of other projects and interests. Irene had an infectious laugh, a wicked sense of humor, and will be dearly missed.

A Memorial Service for Loretta Irene was held on Saturday, July 11, 2020 at 11:00 a.m., at the Fairmont Community Church in Fairmont, Nebraska with Pastor Seungli You presiding. There were 3 recorded songs for the service, &#8220;Amazing Grace&#8221;... View Obituary & Service Information

The family of Loretta Irene Sievert created this Life Tributes page to make it easy to share your memories.

A Memorial Service for Loretta Irene was held on Saturday, July...

Send flowers to the Sievert family.