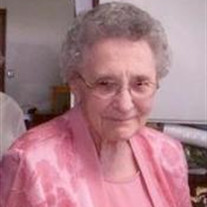 Loretta Mae Troyer was born to Abraham Lincoln Troyer and Emma Eichelberger Troyer on April 23, 1919, in Shickley, Nebraska, and passed away December 8, 2012 at Fairview Manor in Fairmont, NE at the age of 93. She was the second of twelve children. She was born and raised in Shickley, and ended her formal education in the 8th grade to help with the family. She spent many hours cooking, cleaning, sewing, canning, and caring for her younger siblings. As an adult, she worked a variety of jobs as a nanny, as a grocery store clerk, and most recently, as a cook at the Longhorn Café. This is where she perfected her legendary cinnamon roll recipe. Loretta was a lifelong member of Salem Mennonite Church, Shickley, and was actively involved in the church. She also enjoyed participating in Salem’s WMSC, the women’s sewing group. Loretta enjoyed playing card games with friends and family. Every Monday she played hand-in-foot with her three regular card playing partners. She enjoyed playing Rook and dominoes as well, and often gathered with her siblings to play cards. She had a wonderful sense of humor, and enjoyed teasing her family. She also took great care of her yard, always ensuring it received enough fertilizer and water to look green and healthy. Loretta loved to bake and cook, and enjoyed keeping everyone well fed. She often hosted birthday suppers for her great nieces and nephews who lived nearby, and always made delicious pies for dessert. She always enjoyed children, especially babies, and spent many hours babysitting nieces, nephews, great nieces and nephews, and most recently holding her great-great-nephew Fritz (while mom and dad slept exhaustedly on the sofa). She enjoyed watching Husker football, volleyball, and the World Series, and spent many hours watching sports with her great nieces and nephews. Loretta was preceded in death by her parents, by brother and sister-in-laws Glenn and Aldene Troyer, Ivan and Wilma Troyer, Les and Gladys Troyer, and by brother-in-laws Lee Schlegel, Dale Miller, Leroy Stutzman, Bob Erb, and Larry Springer, by special nephews, Dennis Troyer and David Schlegel. She is survived by brothers and sister-in-laws Jim and Norma Troyer, West Point; Harold and Clarice Troyer, Jesup, IA; and Leonard Troyer, Taloga, OK; by sisters Dorothy Schlegel, Shickley, Betty Springer, Eunice Stutzman of Milford, and by sister and brother-in-law Violet and Merrill Stutzman of Milford; many nieces and nephews, and by special niece Mary Troyer, Shickley, and her children Matthew and his wife Elizabeth and Fritz, Wood River; Brett, Ephrata, PA; Anne, Goshen, IN; and Kristin, Shickley. Memorial services for Loretta were conducted at the Salem Mennonite Church, rural Shickley, NE on Wednesday, December 12, 2012 at 11:00 a.m. Pastors Shawn Nolt and Matthew Troyer-Miller officiated the service. Roxie Schlegel accompanied the congregation in the singing of “How Great Thou Art,” “Amazing Grace,” and “O Beautiful Star Of Bethlehem.” Travis Troyer accompanied Bridget Troyer, who sang “The Lord’s Prayer.” Pallbearers were Todd Miller, Brad Schlegel, Greg Schlegel, Anne Troyer, Brett Troyer, and Travis Troyer. Interment was held prior to the Memorial Service in the Salem Mennonite Church Cemetery with Farmer and Son Funeral Home in charge of arrangements. Memorials are directed to the Salem Church Building Fund.

Loretta Mae Troyer was born to Abraham Lincoln Troyer and Emma Eichelberger Troyer on April 23, 1919, in Shickley, Nebraska, and passed away December 8, 2012 at Fairview Manor in Fairmont, NE at the age of 93. She was the second of twelve children.... View Obituary & Service Information

The family of Loretta M. Troyer created this Life Tributes page to make it easy to share your memories.

Send flowers to the Troyer family.