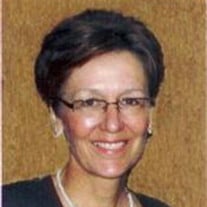 Lori Louise Ruhl-Walford was born December 12, 1960 to Gary and Delores (Rasmussen) Ruhl in Friend, Nebraska. She was the second of seven children born into the family. In November, 2010, Lori was diagnosed with a rare form of bile duct cancer. After a courageous battle, she died at her home in Exeter on June 25, 2011, at the age of 50 years, 6 months and 13 days. Lori was baptized and confirmed at St. Stephens Catholic Church in Exeter. She attended St. Stephens Catholic School until it closed in 1967. She then attended Exeter Public School participating in athletics, band and cheerleading. She graduated with the class of 1979. Lori continued her education at College of St. Mary’s in Omaha, earning her Associate’s degree in nursing in 1982. After working several years she furthered her education at Creighton University where she graduated suma cum laude with bachelor’s degree in nursing in 1999. Lori had a true passion for nursing; she loved her work and dedicated her entire career caring for others. She most recently worked at Fillmore County Hospital in Geneva where she found the staff and administrators to be very appreciative, caring and supportive. Lori’s excellence in her nursing career and kindheartedness for past patients became evident when she was diagnosed. She received numerous cards and letters from many of her former patients and families of loved ones that she had once cared for. On July 3, 1982, Lori was united in marriage to Douglas Hall. To this union three daughters were born, Christina Anne, Sheena Elizabeth and Justina Jenae. On January 19, 2001, Lori married her soul mate, Jerry Walford and welcomed his son, Kelan into the family. After living in Seward for a few years they moved to Exeter and spent several years restoring their home to its original beauty. She was gifted with decorating talents and her home was spectacular down to the smallest details. Lori loved her flowers. Over the years she established a beautiful garden and spent much of her free time tending to the roses and keeping the flower garden picture perfect. Raised in a home filled with music, she took piano lessons for many years. She still loved playing and enjoyed watching her granddaughter learn to play. Lori was dedicated to her work and her family. She was always a huge supporter of her daughters in all their activities growing up and faithfully attended every activity they were involved in. Since becoming a grandmother; she especially enjoyed spending time with her grandchildren and was looking forward to the arrival of her third grandchild. Lori was a caring and loving wife, mother, grandmother, daughter and sister. She will be missed dearly by those left behind, including her husband Jerry; daughters, Christina (Zac) Hartmann, of Exeter, NE, Sheena Hall, of York, NE, J.J. (Zachary) Becker of Lincoln, NE; son, Kelan Walford of Lincoln, NE; mother, Delores Bailey of York, NE; two brothers , Robert (Patrice) Ruhl, of Exeter, NE, Dale (Angela) Ruhl, of Lincoln, NE; four sisters, Kay Due, Rhonda Maxson, of Exeter, NE,Jean (Jim) McKinnon and Kelli (Dan) Anderson, of Lincoln, NE; Mother-in-law, Dorothy Walford of York, NE; brother-in-law, Randy Walford ( fiancé Gail Lutz); two sisters-in-law, Brenda (Scott) Farmer, Deb (Todd) Henkel, of Lincoln, NE; two grandchildren, Cayden and Alivia Hartmann of Exeter, NE. She is also survived by many aunts, uncles, cousins, nieces and nephews and a host of other relatives and friends. She was preceded in death by her father, Gary Ruhl; step-father, Gene Bailey; grandparents, Bernard and Anna Rasmussen and William and Margaret Ruhl; father-in-law, Douglas Walford; and a special great-uncle, Henry Olsen. Funeral Mass will be Wednesday, June 29, 2011 at 10:00 a.m. at the St. Stephen's Catholic Church. Rosary will be 7:00 p.m. Tuesday at the Farmer Funeral Home in Exeter. Visitation will begin Tuesday from 1:00 p.m. until 7:00 p.m. in Exeter. Interment will be in the Exeter Cemetery. Memorials are directed to the family.

Lori Louise Ruhl-Walford was born December 12, 1960 to Gary and Delores (Rasmussen) Ruhl in Friend, Nebraska. She was the second of seven children born into the family. In November, 2010, Lori was diagnosed with a rare form of bile duct cancer.... View Obituary & Service Information

The family of Lori L. Ruhl - Walford created this Life Tributes page to make it easy to share your memories.