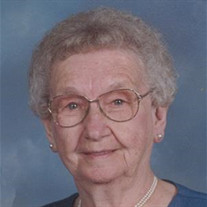 Lorna Arlene Bartels was born to Paul and Bertha (Holtmeier) Meyer on April 21, 1922 at Daykin, Nebraska and passed away on December 29th, 2016 at Fairbury, Nebraska at the age of 94 years, 8 months and 8 days. Lorna was baptized May 28th, 1922 by Pastor E.O. Potratz at Zion Lutheran Church. She received her education at Zion Lutheran School at Tobias and was confirmed on April 5, 1936 at Zion Lutheran Church. Lorna was joined together in holy matrimony to Martin Bartels on April 26th, 1942 by Pastor C.F. Schrein at Zion Lutheran Church. God blessed them with four daughters. Sewing, making quilts, quilting, flowers and gardening were her favorite hobbies. She was a 4-H leader for many years and was active in the community and church. Lorna had perfect attendance at Ladies Aid for 45 years and served on various Committees. She enjoyed decorating cakes and the grandchildren always received one for their birthdays. Survivors include daughters Linda and Ed Kotas of Western, Ardell and Richard Endorf of Malcolm, Diane and Alan Krupicka of Tobias, Arlene and Charles Filipi of Wilber; Grandchildren and spouses, Greg Kotas and Amy, Darin Kotas and Cindy, Rick Endorf and Tracy, Joel Endorf and Sarah, Kristina Jess and Cody, Jason Krupicka and Cindy, Laura Pollock and Josh, Jennifer Filipi, Aaron Filipi and Brittany. 25 great-grandchildren and four step great grandchildren; Sister Vera Weber of Beatrice, Sisters-in-law Clarice Meyer of Daykin and Berniece Pfingsten of Beatrice. She was preceded in death by her husband Martin; her parents, brother Dale, brothers-in-law and sisters-in-law Waddell Weber, Viola and Vern Reetz, Erwin and Nadean Bartels, Bernard and Deloras Bartels and Glen Pfingsten. Funeral service for Lorna will be 10:30 a.m. Monday, January 2, 2017, at the Zion Lutheran Church, Tobias, Nebraska with Pastor Ryan Meyer officiating. Graveside services will follow in the Zion Lutheran Church Cemetery.Visitation will begin 2:00 p.m. until 6:00 p.m. Sunday with family greeting friends from 2 until 4 at the Farmer & Son Funeral Home in Geneva, Nebraska. Memorials are directed to the family for later designation.

Lorna Arlene Bartels was born to Paul and Bertha (Holtmeier) Meyer on April 21, 1922 at Daykin, Nebraska and passed away on December 29th, 2016 at Fairbury, Nebraska at the age of 94 years, 8 months and 8 days. Lorna was baptized May 28th,... View Obituary & Service Information

The family of Lorna A. Bartels created this Life Tributes page to make it easy to share your memories.

Lorna Arlene Bartels was born to Paul and Bertha (Holtmeier)...