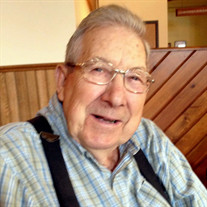 Louis Lawrence Schropfer was born to William Joseph Schropfer and Marie Amelia (Tischer) Schropfer on July 2, 1928 at his parents’ farm east of Ohiowa, and passed away August 11, 2019 at the age of 91 years, 1 month, and 9 days. He was the youngest of three sons in the family. Louis attended grade school at two rural country schools, and he graduated from Ohiowa High School in 1945. Louis enjoyed playing sports, especially basketball in high school and baseball in Tobias. After graduation, he farmed with his Dad and brother, Jess, until he was drafted into the Army on May 5, 1951. Louis’s service ended on October 17, 1951 when he received a medical discharge to undergo surgery for spinal meningitis complications. After recovering, Louis returned to the family farm. On August 21, 1954, Louis and Darlene Ruth Bumgarner were united in marriage. To this union, five children were born. They raised their family on a farm on the south end of Ohiowa. In 1993, they moved to the home farmstead east of Ohiowa, where Louis resided and was still mowing with his dog, Skipper, seated at his feet until three weeks before his death. As a couple, Louis and Darlene enjoyed dancing, playing cards, family gatherings and vacations, and attending their kids and grandkids sporting events and activities. Pasture softball games followed by a wiener roast are fond family memories. Louis loved to share bits of wisdom to his kids on the finer points of playing and coaching sports. Grandchildren will remember Louis teaching them how to play pitch and countless card games over the years. All will remember his sense of humor, honesty and integrity, and his strong work ethic. Louis was baptized as an infant and later joined St. John’s Lutheran Church in 1954 where he served several terms on the Church Council. Louis also was a member of the Board of Education at Ohiowa Public School and the Ohiowa American Legion. He was proud to receive the Quilt of Valor, alongside his fellow veterans, in 2015. Louis was a meticulous farmer, thrived on hard work, and took pride in his crops. Wheat harvest was his favorite time on the farm. Just a few weeks ago, Louis was able to ride on the combine. He was amazed and appreciative of this year’s bountiful wheat harvest. Louis and Darlene also raised cattle and hogs. Many times, a calf born on a cold day would end up in their house by the furnace, getting warmed up until it could return to its mom. Louis farmed with his brother Jess for many years and then later farmed until well into his 70’s with Robert. After retirement and up to age 90, Louis was still able to help Robert with harvest by running the grain cart. As a name tag at Robert’s 40th birthday party jokingly read, Louis was, “Robert’s underpaid, underappreciated, farming expert and hired man!” Louis lived until he died. In the last month of his life he was able to enjoy a baseball game at the College World Series, his 91st birthday celebration, a family reunion over the 4th of July, mowing with his dog, and his final wheat harvest. Louis and Darlene would have celebrated their 65th wedding anniversary on the 21st of August. Louis was preceded in death by his parents, William and Marie Schropfer; brothers, Reinhart (Marge) Schropfer and Jess Schropfer; son-in-law, Steve Betka, and granddaughter, Jennifer Marie Siert. He is survived by his wife, Darlene Schropfer, sister-in-law, Georgia Schropfer, and children Audrey (Jim) Betka-Mager of Lincoln; Janet (John) Siert of Eldora, Iowa; Robert (Chris) Schropfer of Ohiowa; Mary Schropfer of Lincoln; and Kay (Jay) Knapp of Ord. Grandchildren are Derek (Brooke) Betka; Ryan Betka; and Step Grandchildren Melissa and Jamie Mager; Grandchildren Kristen (Michael) Murphy; Matt (Alina) Siert; Carmen (Tyler) Alexander; Kimberly Schropfer; and Austin, Mitchell and Adam Knapp. Great-grandchildren are Kayleigh, Kelsey, Kaitlyn, and Kierstyn Betka; Claire and Jack Murphy; Micah Siert; and Natalie and Lauren Alexander. Louis is also survived by numerous nephews, nieces, cousins, neighbors, and friends. A Funeral Service for Louis was held on Friday, August 16, 2019 at 10:00 a.m. at St. John’s Lutheran Church in Ohiowa. PMA Jim Germer officiated the service. Nancy Cradduck accompanied the congregation in the singing of “This Is My Father’s World,” “On Eagle’s Wings,” “How Great Thou Art,” and “Amazing Grace.” Nancy also accompanied Brooke Betka in the singing of “In Christ Alone.” Pallbearers for the service included Derek Betka, Ryan Betka, Matt Siert, Michael Murphy, Austin Knapp, Mitchell Knapp, Adam Knapp, and Tyler Alexander. Honorary Casket Bearers included Kristen Murphy, Carmen Alexander, and Kimberly Schropfer. Interment was held in the Ohiowa Public Cemetery with Military Rites performed by the Ohiowa American Legion Franklin Post 193 and the Nebraska Military Honor Guard. Farmer & Son Funeral Home was in care of the arrangements and online condolences can be left at www.farmerandsonfuneralhome.com. Memorials are suggested to the St. John’s Lutheran Church or the Ohiowa American Legion Post 193.

Louis Lawrence Schropfer was born to William Joseph Schropfer and Marie Amelia (Tischer) Schropfer on July 2, 1928 at his parents&#8217; farm east of Ohiowa, and passed away August 11, 2019 at the age of 91 years, 1 month, and 9 days. He was... View Obituary & Service Information

The family of Louis L. Schropfer created this Life Tributes page to make it easy to share your memories.