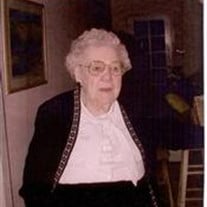 Louise Koehler Picard was born on March 28, 1909, in a white stucco house at 1231 G Street in Geneva the youngest of four children born to Barthold and Clara Hoover Koehler. Her brothers were John, Ben and George. She passed away at Fairview Manor in Fairmont on Friday, August 19, 2011, at the age of 102. Her father was a prominent businessman in Geneva and Strang. The A. Koehler Co. dealt primarily in lumber, coal, grain and building and farming supplies. Louise became a member of the Geneva Congregational Church at the age of 13. She attended Geneva Public Schools and graduated with the class of 1926. She attended Stevens College in Columbia, Mo., and when her father passed away, she transferred to Hastings College in Hastings. She was a lifelong Nebraska Cornhusker fan and attended her first game at the age of seven with her brother John. In 1928, she married Charles L. Picard, Jr., the son of Charles and Maude Picard. The elder Charles was a partner with his brother Fred in the Picard Pharmacy of Geneva. Louise and Charles had four sons, William, Charles III, John and Benjamin. Though Charles and Louise lived in many places throughout their 53 years together, they always considered Geneva their home. Charles, a registered pharmacist, practiced his trade in Crete, Liberty and Omaha prior to returning to Geneva in 1936. He started the hatchery and turkey farm when he joined Louise’s brothers in the A. Koehler Co. In 1941, Charles and Louise opened the Thrifty Drug Store, a Walgreen Agency store, in Geneva. The drugstore soda fountain was a popular place for the service men stationed at the Fairmont Army Airfield. During the 1950's and early 60's, Charles and Louise owned motels in Arizona and resorts in Minnesota. They returned to Geneva and purchased the Goldenrod Motel. After selling the Goldenrod, they purchased a motel in Oklahoma. They returned permanently to Geneva in 1972. Louise was active in PEO, Geneva Woman’s Club, Kensington and the Congregational Church Women's Fellowship. She was a valued resource for historical information about the Geneva community and assisted the Geneva Q-125 committee by identifying occupants of various business buildings. Louise also assisted the Congregational Church with its history and shared her memories of the present church structure built in 1926. She is preceded in death by her parents, husband, Charles; brothers, John, Ben and George; infant brother, Barthold and still born daughter, Susan; daughters-in-law, Jean Picard and Margaret Picard and grandson, Shannon Picard. She is survived by her sons, William of Omaha, Charles III and John, both of Geneva and Benjamin and wife Susanna Lee of Sunnyvale, Calif.; grandchildren, Robert Picard and Elizabeth Picard, both of Omaha; Chris Picard and wife Laura of Salt Lake City, Utah; Mikel Picard and wife Janice of York; Daniel Picard and Christine of Crete; Jennifer Anderson and husband Bradley of Hastings; Mitchell McKnight and wife Michelle of Des Moines, Iowa, and April Picard of Kearney along with 22 great-grandchildren many nieces, nephews, cousins and friends. Memorial services for Louise were held on Saturday, August 27, 2011 at 10:30 a.m. at the First Congregational United Church Of Christ in Geneva with Pastor William Switzer officiating. Nancy Cradduck played the prelude and postlude on the organ and Bill Turek performed “It’s A Wonderful World” and “Young At Heart” on the piano. Farmer & Son Funeral Home was in charge of arrangements and memorials are directed to the Geneva Arts Council or First Untited Congregational Church of Christ.

Louise Koehler Picard was born on March 28, 1909, in a white stucco house at 1231 G Street in Geneva the youngest of four children born to Barthold and Clara Hoover Koehler. Her brothers were John, Ben and George. She passed away at Fairview... View Obituary & Service Information

The family of Louise K. Picard created this Life Tributes page to make it easy to share your memories.

Send flowers to the Picard family.