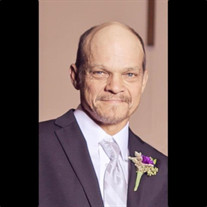 Lowell Dean Bartels was born in Fairbury, Nebraska on April 18, 1959 to Gaylord & Patricia (Hamouz) Bartels. He passed away peacefully at Bryan Medical Center, in Lincoln, Nebraska on Thursday, January 6th, 2022 at the age of 62 years, 8 months, and 19 days. He was the oldest of 2 children born in the family. Lowell grew up on a farm south of Tobias, Nebraska and attended Meridian High School. After High School, Lowell attended Southeast Community College in Milford, NE in the Building Construction Program. Lowell stayed dedicated to his trade and worked many years in building construction and carpentry, while building many friendships with coworkers and customers along the way. His dedication to his trade, great work ethic and willingness to teach are the characteristics that best describe Lowell. Anyone who knew Lowell knows he sure enjoyed a good laugh with friends and coworkers. Always willing to teach those around him, especially when it came to the carpentry trade and gardening. He had a heart for animals, especially his dogs at the farm. He also had a love and skill for gardening, where he spent many evenings during the summer canning vegetables and tending to his garden. Although his animals and gardening had a special place in his heart, nothing could come close to the love he had for his three children and eight grandchildren. Whenever he had the chance to see them or hear about them, the emotions would pour out in laughter and were usually followed by tears of joy. Father, grandpa, son, brother and friend; you will be deeply missed by all. Lowell was preceded in death by his father, Gaylord Bartels. He is survived by his children Tyler (Julie) Bartels of Friend, NE; Danielle (Ed) Raney of Wahoo, NE; Shamree (Brett) Baller of Omaha, NE; grandchildren Rylan, McKinley and Brecken Bartels of Friend, NE; Ezra and Kizer Weaver of Wahoo, NE; Shaelyn, Rylee and Ava Baller of Omaha, NE. He is also survived by his mother, Patricia Bartels of Tobias, NE; sister, Sherrill (Dwayne) Wolfe of Daykin, NE; Niece, Melanie (Deste) Baptiste of Kansas City, KS; Nephew, Brent (Elissa) Wolfe of Strang, NE; and many cousins and friends. A Memorial Service for Lowell was held on Friday, January 21, 2022 at 10:30 a.m. at Farmer & Son Funeral Home – Kotas Chapel, in Milligan, Nebraska. Pastor Eric Black presided over the Memorial Service. The recorded selections “Good Good Father” and “Scars In Heaven” were played during the Memorial Service. A Graveside Committal of Ashes was held in the Tobias City Cemetery following the Memorial Service. Farmer & Son Funeral Home was in care of the arrangements and online condolences can be left at www.farmerandsonfuneralhome.com Memorials are suggested to the JDRF (Juvenile Diabetes Research Foundation); https://www2.jdrf.org

Lowell Dean Bartels was born in Fairbury, Nebraska on April 18, 1959 to Gaylord & Patricia (Hamouz) Bartels. He passed away peacefully at Bryan Medical Center, in Lincoln, Nebraska on Thursday, January 6th, 2022 at the age of 62 years, 8 months,... View Obituary & Service Information

The family of Lowell D. Bartels created this Life Tributes page to make it easy to share your memories.

Lowell Dean Bartels was born in Fairbury, Nebraska on April 18,...