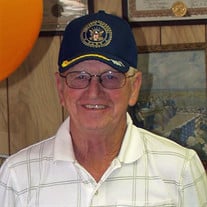 A Funeral Service for Butch will be held on Thursday, December 21, 2017 at 10:30 a.m. at the St. John's Lutheran Church in Ohiowa, Nebraska with PMA Jim Germer officiating. Visitation will be held on Wednesday, December 20, 2017 from 3:00 p.m. until 8:00 p.m. with the family present from 4:00 p.m. until 6:00 p.m. at Farmer & Son Funeral Home in Geneva, Nebraska. Military Graveside Services will be conducted from the Ohiowa Public Cemetery in Ohiowa, Nebraska with the Ohiowa American Legion - Franklin Post 193 conducting Military Honors. In Lieu of Flowers - Memorials are to be directed to the family to be designated to Gas Cards for Cancer. Lowell Thomas “Butch” Myers was born to Lowell J. and Aileen (Guinard) Myers in Hastings, Nebraska, on April 5, 1946. After a 16 month battle with small cell lung cancer, he passed away with family at his side on December 18, 2017 in his home at Ohiowa, Nebraska, at the age of 71. He was one of 14 children in the family. He attended Hastings Schools and enlisted in the U. S. Navy in 1963. He was stationed in California and served aboard the USS Montrose APA 212 (troop transport) during the Vietnam War. He was honorably discharged in 1967. He was a member of the Ohiowa American Legion Post #193. While in California, he was married and had two children, Katina and Thomas "Eddie". After returning to Nebraska, he worked at various jobs until he began working for Kremer Electric of Milford, NE, rebuilding power lines after the ice storm in 1976. Here he met Helen Mussman; they were married on July 30, 1977 and had 2 children, Anna (Annie) Marie and Richard "Rick" Allen. In August, 1978, Butch and Helen moved to Ohiowa and Butch began a 20+ year career with Biba Engineering of Geneva, NE, traveling the state working road construction. He went to work for Fillmore County Roads Department after Biba Co. closed, and continued maintaining county roads until his retirement at age 65. He also spent time maintaining Ohiowa city streets and area township roads. Following his retirement, Butch took an empty concessions trailer and built it into the Snack Shack at the Alexandria State Lakes, helping Helen fulfill her dream of running a restaurant. They enjoyed building their business while meeting new people, visiting with friends (old and new), and watching sunsets and geese on the lake. Butch and Helen enjoyed traveling together on bus tours, camping, and the warmer climate of South Texas in winter. Family and friends were important to Butch; he was ready to help whoever needed him. Some of Annie’s and Rick’s favorite memories included Mom’s bowling night when Dad would cook pork ‘n’ beans with hamburger and take them to Patty and Norm’s for games. Butch was a regular at the Ohiowa Co-op for morning coffee, usually arriving early and waiting for someone to unlock the door. He loved to tease people and always had a quick comeback. He maintained his sense of humor and “not-so-innocent” grin to his final days. Butch is preceded in death by his parents, his sons Thomas and Rick; sisters Jane and husband Robert Jones and Lola Spooner; brother Rodney; infant sister Lois and a stillborn brother; sister-in-law Patty Myers; brothers-in-law Lyle Mussman and John Dodds; father-in-law Dallas Mussman; and other relatives and friends. He is survived by his wife of 40 years, Helen; daughters Annie (Rod) Manley and Katina (Scott) Bradley and daughter-in-law Cindy Myers; brothers Don & Dale; sisters Irene Buss, Susie Myers, Carol Myers, Dee (Doug) Johnson, Helen Dodds, Joyce (Dennis) Dyer; mother-in-law Claire Ann Mussman; brothers-in-law Bill Spooner, Rex (Lynn) Mussman, and Brian "BJ" (Wendy) Mussman; sister-in-law Marjorie Raymond; aunts, uncles, nieces, nephews, cousins, many friends and “grandpups” Turbo, Gino and Buster. Organist, Nancy Cradduck, accompanied the congregation in 3 songs, “How Great Thou Art”, “What A Friend We Have In Jesus” and “God Be With You Till We Meet Again”. There was one special song played during the service and it was “Ships Of Heaven” by Blackhawk. Pallbearers included; Matthew Myers, Chris Mussman, Henry Mussman, Steve Ozenbaugh, Rex Jiskra and Dan Johnson.

The family of Lowell T. "Butch" Myers created this Life Tributes page to make it easy to share your memories.

A Funeral Service for Butch will be held on Thursday, December...

Send flowers to the Myers family.