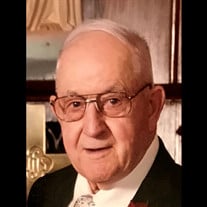 On August 30, 2019, Lowell LeRoy Steider passed away at the age of 95 at Heritage Crossings, Geneva, Nebraska. Lowell was born to Lee and Emma Saltzman Steider on December 21, 1923, near Shickley, Nebraska. He was the oldest of six children. Lowell grew up on a farm. He was drafted and served in Civilian Public Service in Hill City, South Dakota, helping build Deerfield Dam, and on a dairy farm in Wisconsin. Following this he volunteered with Mennonite Central Committee as a relief worker in the Philippines and Indonesia. On June 17, 1951, he married Bernice Kempf, and together they farmed in the Strang and Shickley communities. They had five daughters: Susan, Ruth, Barbara, LuAnn and Rebecca. Bernice preceded him in death on August 16, 2007. On May 31, 2012, he married Bertha Workentine who survives. As a youth he accepted Christ as his Savior and was baptized at Salem Mennonite Church, Shickley. His strong faith was illustrated by his lifelong commitment to Salem Mennonite Church, and through his lifetime of service. He served as a weekly volunteer at Youth Rehabilitation and Treatment Center, Geneva, with Prison Fellowship for 30 years. He loved music. He could be found whistling or singing while he worked. In his retirement years he enjoyed woodworking and restoring furniture for anyone. He is survived by daughters and sons-in-law: Susan and Gordon Miller, Waynesboro, VA; Ruth and Jack Yoder, Bruning; Barbara and Robert Steury, Goshen, IN; LuAnn and Douglas Steury, New Paris, IN; and Rebecca and Timothy Hochstetler, Strang; 17 grandchildren and 25 great grandchildren. Also surviving are 2 brothers and sisters-in-law: Delmar (Eva) Steider, Highland Ranch, CO; and Leonard (Janice) Steider, Hesston, KS; and sister MaDonna Swartzendruber, Shickley. Preceding him in death were his first wife Bernice Kempf, his parents Lee and Emma Steider, brothers Kenneth and Lester, and great-grandchild Nora Grace Yoder. A Memorial Service for Lowell was held on Friday, September 6, 2019 at 4:00 p.m. at Salem Mennonite Church, rural Shickley, Nebraska. Pastors Shawn Nolt & Gordon Miller officiated the Services. Barbara Steury was the pianist and Shirley Kempf was the song leader and she led the congregation in the singing of “My Life Flows On” and “I Am The Bread Of Life.” A private family Graveside Service was held in the Salem Cemetery prior to the Memorial Service. Pallbearers included Jeff Yoder, Jon Yoder, Robert D. Steury, Michael Steury, David Hochstetler, and Philip Hochstetler. Farmer & Son Funeral Home was in care of the arrangements and online condolences can be left at www.farmerandsonfuneralhome.com Memorials are suggested to the Salem Mennonite Church or Prison Fellowship.

On August 30, 2019, Lowell LeRoy Steider passed away at the age of 95 at Heritage Crossings, Geneva, Nebraska. Lowell was born to Lee and Emma Saltzman Steider on December 21, 1923, near Shickley, Nebraska. He was the oldest of six children.... View Obituary & Service Information

The family of Lowell L. Steider created this Life Tributes page to make it easy to share your memories.