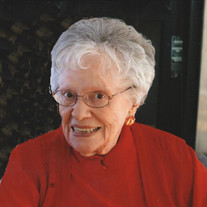 Lucetta Ann Jilg Adkisson was born to Leo and Mary Loebe Jilg on May 19, 1930 in Osmond, Nebraska, and passed December 8, 2014 at Southlake Village in Lincoln, Nebraska at the age of 84 years, 7 months, and 19 days. She was one of 10 children in the family. The family moved to Clarks, Nebraska where she attended Clarks Public Schools and graduated in 1947. Lucy then attended Nebraska Beauty School in Omaha. In 1948 she returned to Clarks and became the owner of the Clarks Beauty Salon where she served her clients for 21 years. Upon the untimely death of her mother when Lucy was 18 she became the caregiver for her eight siblings. It was because of Lucy’s love of family and her unselfish heart that she kept the family together. Lucy was married to Kenneth Laverne Adkisson of Duncan, Nebraska on November 8, 1955 and to their union three children were born. In 1971, the family moved to Geneva where Ken would continue his career with the Nebraska Game and Parks Commission. Lucy worked at Lamplighter Café and Dowd Faimon Drug Store which later became F&M Drug. She enjoyed her time with co-workers and customers. Upon the early death of her beloved Ken on October 15, 1986 she embarked on a new life journey and moved to Lincoln. Lucy developed a new passion for garage sales. You just never knew what new treasures she would find. She could also sew and alter like a seamstress, and her siblings and children were the beneficiaries of many of her creations. Faith was an integral part of Lucy’s life. She was a devout member of the Cathedral of the Risen Christ. Lucy was truly an amazing wife, mother, grandmother, sister, and friend. Her greatest joy was spending time with her family. The grandchildren always looked forward to visiting Grandma at the Van Dorn Villa. Dancing to the player piano or a game of shuffle board in the Friendship Room were always a must. Her positive outlook on life served her well, which was especially evident during her recent health challenges. Lucy was preceded in death by her parents, two brothers Leo Jr. and Fritz, sister Mary Helen Wyman, five brothers-in-law, her husband Ken, and grandson Austin Adkisson. She is survived by her siblings Rosie Irvine of St. Paul, Gerry Kuhn of Grand Island, Dorothy Sheets of Littleton, Colorado, Eleanor Bender of Council Bluffs, Iowa, Ralph (Brenda) Jilg of Silver Creek, and Carol Cortinas of Omaha, her children Gina (Dennis) Francke and Ken (Dianne) Adkisson of Lincoln, Nebraska and Steve (Becky) Adkisson of Geneva, ten grandchildren, and five great-grandchildren. Funeral Mass for Lucy will be 10:00 am Friday, December 12, 2014 at the St. Joseph's Catholic Church in Geneva, Nebraska. Rosary will be Thursday evening at 7:00 pm at the Church. Visitation will begin Thursday from 1:00 pm until 5:00 pm at the Farmer & Son Funeral Home in Geneva and then at the church from 6:30 until Rosary. Interment will be in the St. Joseph's Catholic Cemetery. Memorials are directed to the family for later designation in lieu of flowers.

Lucetta Ann Jilg Adkisson was born to Leo and Mary Loebe Jilg on May 19, 1930 in Osmond, Nebraska, and passed December 8, 2014 at Southlake Village in Lincoln, Nebraska at the age of 84 years, 7 months, and 19 days. She was one of 10 children... View Obituary & Service Information

The family of Lucetta Ann Adkisson created this Life Tributes page to make it easy to share your memories.

Send flowers to the Adkisson family.