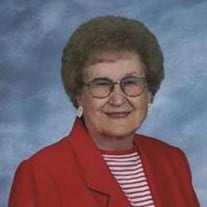 Lucille Gretchen Thomas was born to John Herbert Duis and Amelia Anna Breitwieser Duis on May 31, 1925, on a farm near Bruning, Nebraska, and passed away March 29, 2014, at Heritage Crossings in Geneva, Nebraska at the age of 88 years, 9 months and 28 days.  She was one of 5 children in the family. Lucille was baptized into the Christian Faith in June of 1925 and confirmed in May 1942.  She attended rural schools in the Bruning area and graduated from Bruning High School in May of 1942.  She attended Hasting College where she began preparing for a career in teaching.    Lucille graduated from Seward Concordia Teacher College in Seward, Nebraska.  She spent 38 years of service to children through her teaching in rural schools in Fillmore County and the Geneva Public School system.   In May of 1982 she was selected Best Teacher in the State of Nebraska and received the Cavett Award given to her personally by Doris Cavett.  After many years of dedicated teaching she retired in 1987. Lucille was married to Gustav Thomas of Ohiowa, Nebraska on March 9, 1946 and to them 2 children Thomas  Duis Thomas and Jayne Ellen Thomas were born. They lived in the Ohiowa area during their entire married life.  Lucille was a lifelong member of the Lutheran Church and remained active as long as her health permitted.  She was an avid student of the Bible and loved teaching Bible School, Sunday school and confirmation classes.  She especially enjoyed the College classes in Religion, which she took at Seward Concordia.  Her favorite was the book of Psalms.  Her Bible was marked with a summary of many of the chapters.  Her religion was always very important to her and it was not uncommon for her to tell family and friends that she would pray for them.  Lucille had many interests.   She crocheted and made many quilts and afghans for her children and grandchildren and she loved to read.  Her upper most concern was for her family especially her grandchildren and great grandchildren.   Lucille was a loving mother and grandmother who always had time for her family and friends.  She enjoyed keeping in touch with relatives and friends with notes of encouragement, get well cards and birthday greetings as well as extending sympathy. Her philosophy of life was that in todays complex world we need to reaffirm the things that are truly important in life – Faith, Hope, Optimism and Joy.  Precious gifts that can be ours when we open our hearts to others and believe in God.  She was always a giver of her time, talents guidance and love and she will live on forever in each of our hearts.  Lucille was preceded in death by her husband Gustav, son Thomas, father and mother John and Amelia Duis, son-in-law Johnny Halama, step brothers Ervin Duis, Clarence Duis and Marvin Duis.  She is survived by her daughter Jayne Ellen Halama, sister Eileen and husband Marvin Meyer, grandchildren JoDee and husband Andy Dunker, Jill and husband John Muff and Jon Halama.  Great grandchildren Owen and Bret Dunker, Austin and Connor Krumme and Makayla Muff. Services for Lucille will be 10:30 a.m. Wednesday, April 2, 2014, at the St. John's Lutheran Church in Ohiowa, Nebraska.  Interment will follow at the Ohiowa Public Cemetery.  Vistitation will begin at 1:00 p.m. until 8:00 p.m. on Tuesday at the Farmer & Son Funeral Home in Geneva, Nebraska.  Memorials are directed to the family for later designation.

Lucille Gretchen Thomas was born to John Herbert Duis and Amelia Anna Breitwieser Duis on May 31, 1925, on a farm near Bruning, Nebraska, and passed away March 29, 2014, at Heritage Crossings in Geneva, Nebraska at the age of 88 years, 9 months... View Obituary & Service Information

The family of Lucille G Thomas created this Life Tributes page to make it easy to share your memories.

Send flowers to the Thomas family.