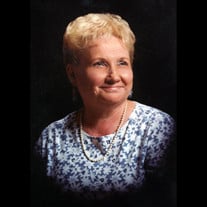 Luella Fay Hogue was born in Sutton, Nebraska on March 25, 1932 to Samuel F. and Ruth E. (Schultz) Huntley. She passed away in Fairmont, Nebraska on November 8, 2016 at the age of 84 years, 7 months, and 14 days. She was one of 3 children born in the family. Luella was raised on a farm between Geneva and Sutton. She went to a country school until she started high school in Geneva. Her sister, LaVerna was 12 years older and her brother Eugene was 9 years older, so Luella always said her dad spoiled her. Eugene would pick on her and one time, when she was too little to know better, he told her to touch the fence. Of course, it was electrified. It knocked her down and she ran back to the farmhouse crying. Luella said Eugene got in big trouble with their dad! Luella met Robert Hogue while she was in Geneva, and they married June 2, 1948. To this union five children were born: Connie, Sandi, Ruthie, Sam and Patty. As most young families do, they struggled to make ends meet. Luella spoke of a lot of times they only had pancakes to eat, so grandma would bring milk, eggs, and meat from the farm without Luella’s kids realizing it. Along with the help of family, Luella took in ironing, cleaned houses, and worked at J.C. Penny’s to make ends meet for the family. She finally found her true calling when she got a job at Riteway Oil in Fairmont, dispatching gasoline trucks. She loved it so much that when the company moved to Lincoln, she moved there too. She treated her drivers like family. Luella was with the company for 25 years until retirement. After retirement, Luella wasn’t the type to just sit in her rocker. She got a part time job at the elementary school just down the street from her house. She worked in the cafeteria and loved being with the little kids. The house Luella bought in 1991 was perfect for her. It had only one bedroom, (she said that way nobody could move in with her) and big yard. She would decorate it with flowers, ornaments and put in a garden every year. Luella was always “on the go.” She enjoyed traveling and family get togethers with the Huntley’s and the Hogues since they get crazy! She also loved bowling with her friends in Geneva. They would go to the State and National tournaments. We never were sure which was more…pins knocked down or drinks knocked back! As everyone knew, Luella was the “Cat Lady.” She loved them and they were her babies. Blackie was her cat for 17 years and Shadow was for 15 years. As Luella got older, she started accumulating more cats. She would feed a stray and somehow it got sent over the “Cat Hotline” that there was food at Luella’s house. The next day they would be lined up at the back door. At one point she had 7 cats living with her! Luella always knew the people were from Geneva when they greeted her by the name “Luella,” because her Lincoln friends always greeted her by the name “Lu.” Luella was a member of the Geneva VFW and American Legion for 45 years. She was also a life long member of the United Methodist Church. Step by step, dementia took Luella away. We miss talking with you We miss her wit We miss her wisdom We miss our Mom Luella was preceded in death by her daughter, Patty Hogue; grandson Brian Fikar, Brother Eugene Huntley; sister LaVerna Tenopir; ex-husband Robert Hogue; sons-in-law Dale Mason and Chuck Hulse. She is survived by her daughters Connie Hoagland and husband Galen of Harvard, Nebraska, Sandi Mewhirter and husband Jim of Geneva, Nebraska, Ruthie Keenan of Lincoln, Nebraska; son Sam Hogue and fiancé Brenda Rowland of Geneva, Nebraska; 12 grandchildren and 19 great grandchildren. Funeral services for Luella were held on Monday, November 14, 2016 at 10:30 a.m. at the Farmer & Son Funeral Home. Kim Dunker officiated the services. Recorded selections “Amazing Grace” and “When I Get Where I’m Going” were played during the service. Pallbearers for the service included Brent Hulse, Brad Hulse, Cory Hulse, Chad Fikar, Kirk Fikar, and Travis Mason. Interment was held in the Geneva Public Cemetery. Memorials are directed to the Capital Humane Society. Online condolences may be left at www.farmerandsonfuneralhome.com.

The family of Luella F. Hogue created this Life Tributes page to make it easy to share your memories.

Send flowers to the Hogue family.