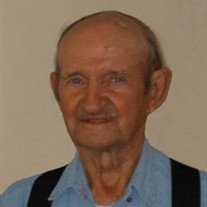 Lumir Frank Jansky was born to William Louis Jansky and Mamie Ann (Simacek) Jansky on August 18, 1933, on a farm northeast of Tobias, Nebraska, and passed away May 13, 2014, at Exeter Care Center, at the age of 80 years, 8 months and 25 days. He was one of five children in the family. Lumir attended Palmer country school District #30 for five years. In 1944 the family moved 5 ½ miles east of Milligan and he attended Golden Egg country school District #53 through the eighth grade. He graduated from Milligan High School with the Class of 1951. After high school, Lumir rented some farm ground and also worked for his uncle, Albert Michl, at Michl Service Station for one year. Lumir served in the National Guard prior to enlistment in the United State Navy. He enlisted into the Navy on November 23, 1953, and was honorably discharged on November 1, 1957. He was a first class pipefitter. Lumir met Mary Cruess at a dance club in Germantown, Manhattan, New York, in early 1956 while Lumir was stationed in the U.S. Navy. They eloped and were married on August 19, 1956, in Nassau County, Long Island, New York. They lived in an apartment at Sunny Side, Queens, New York, until late 1956 when they were relocated to Neptune Beach, Florida. In November 1957, Lumir was discharged from the Navy and they moved to a farm southeast of Milligan, where they lived their entire married life. Lumir and Mary had one son, William (Will), who was born in 1965. Lumir was a member of the Elks Club in Fairbury and the VFW in Beatrice. He loved the farm life and polka music. Lumir enjoyed telling stories about his time in the Navy and about his 12 years working as mill operator and shift supervisor along with many other responsibilities at Geneva Tube, later known as Ipsco. He retired from Ipsco in 1997. Lumir spent quality time with his two grandchildren throughout their entire lives, fishing and supporting all of their activities. He was more than ‘grandpa’; he was their special friend and somebody they turned to in time of need. Lumir was able to finish his last harvest in October 2013, riding in the combine alongside family and friends. Lumir was preceded in death by his parents, William and Mamie (Simacek) Jansky, brother and sister-in law, Les and Mary Jansky and brothers-in-law Milton Synovec, George Cruess, and Bill Mack. He is survived by wife Mary of Tobias, son Will and wife Ann (Kampschnieder) Jansky of Friend, grandsons Brent and Darin Jansky, both of Milligan, brother Larry and wife Diane of Milligan, sisters Harriet Synovec of Friend and Marian and husband Walt Umphlett of Santa Maria, CA, brothers-in-law and sisters-in-law Patricia Curess of Manhattan, NY, Leona Cruess of St. Augustine FL, Raymond Cruess of Stonybrook, NY, Joann and husband David Roth of Holtsville, NY, and John Cruess and wife Maria of Plainview, NY, and many other relatives and friends. A Memorial Service will be held at 2:00 p.m. Friday, May 16, 2014, at the Milligan, Auditorium in Milligan, Nebraska. No Visitation - Cremation. Memorials are directed to the family for later designation in lieu of flowers.

Lumir Frank Jansky was born to William Louis Jansky and Mamie Ann (Simacek) Jansky on August 18, 1933, on a farm northeast of Tobias, Nebraska, and passed away May 13, 2014, at Exeter Care Center, at the age of 80 years, 8 months and 25 days.... View Obituary & Service Information

The family of Lumir F. Jansky created this Life Tributes page to make it easy to share your memories.

Send flowers to the Jansky family.