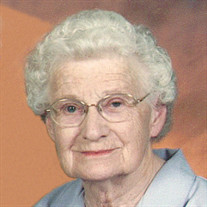 A Funeral Service for Luree was held on Saturday, December 28, 2019 at 10:30 a.m., at the United Methodist Church in Bruning, Nebraska with Pastor Jeanie & Martin Leeper presiding. Accompanist, Linda Young, lead the congregation playing, “How Great Thou Art” and “In The Garden”. There was also a special recorded song sang by Linda Young played during the funeral service, “Precious Lord, Take My Hand”. Pallbearers included Zachary Swartz, Kodey Swartz, Scott Schlegel, Leroy Rohr, Ace Stahlnecker and Ray Baldwin. Graveside Services were held following the funeral service at the Shickley Public Cemetery in Shickley, Nebraska. Memorials were directed to the family to be designated at a later date. Farmer & Son Funeral Home was in charge of funeral arrangements. Luree Mae (Peterman) Schrock was born May 21,1925 to Harry and Marie (Cecrle) Peterman in Friend, Nebraska. Luree graduated from Milligan High School and soon after completed Teacher's Training. She taught at a country school in the Milligan area for many years. She and Forest were married June 12,1945. The couple farmed together at Davenport and Ong and later moved to the family farm in Bruning in 1954. They adopted their daughter, Linda in November of 1955 and their son Gary in May of 1960. Many happy memories were made on that family farm. Luree was an active member of the Bruning United Methodist Church, teaching Sunday School and service work through the United Methodist Women. Luree had many talents including her beautiful sewing, needlework, crocheting and homemaking. She was a wonderful cook. There was always a fresh batch of cookies for the grandchildren and she made Christmas magical for the family she loved so much. She enjoyed square dancing, gardening, canning and growing beautiful flowers. After retiring and moving to their home in Bruning, she loved returning to the farm to tend the garden and her flowers. Luree was preceded in death by her beloved husband, Forest, son, Gary, mother, Marie Peterman and brother, Leo Cecrle. She is survived by her daughter, Linda Young of Eagle, Nebraska, Grandsons Jeremy Swartz and wife, Kandi of Fairbury, Nebraska, Lance Swartz of Bruning, Nebraska, and Tim Schrock of McPherson, Kansas, Great Grandchildren, Kaden, Kodey and Zachary Swartz, Paige Maschmann and Cody Hunkins, as well as many dear friends, neighbors, nieces and nephews.

The family of Luree M. Schrock created this Life Tributes page to make it easy to share your memories.

A Funeral Service for Luree was held on Saturday, December 28,...

Send flowers to the Schrock family.