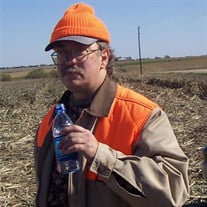 A Graveside Committal of Ashes will take place for Ronny on Saturday, October 23, 2021 at 10:30 a.m. at Bohemian National Cemetery in Milligan, Nebraska. Fr. Rand Langhorst will preside over the Graveside. The Milligan Sons of the American Legion will provide Rites at the Committal Service. There will be a lunch to follow at the Milligan American Legion. M. Ronald Svec Jr. (63) of Stanley, Kansas passed away due to complications from Covid-19 on August 9th, 2021, in the presence of family at St. Luke’s South Hospital. Ron (Ronny) was born on November 2nd, 1957, at Camp Pendleton, CA. to Lieutenant M. Ronald Svec Sr, (USMC) and Jeanette Luzum Svec. Ronny graduated from Blue Valley High School, Stanley, KS, in 1976 where he ran cross country and track (completing the Kansas City Marathon later in life). He also attended Southeast Community College in Milford, NE. He worked at various retail stores throughout his life, mainly at night. Ronny was a member of Holy Spirit Catholic Church and was active in the Knights of Columbus and Sons of the American Legion (Milligan, NE). Ronny enjoyed Monday afternoon pitch games with his neighbors, Thursday morning golf with his Knight of Columbus friends and attending auctions on the weekends. His true calling was visiting with family and friends, especially with those in Nebraska. He made monthly trips between his home in Stanley and Milligan, NE, usually with his truck and trailer loaded with items going either direction. During these trips he made a point of visiting as many family and friends as possible to get the latest news so he could share that with us back in Kansas. He will be fondly remembered by all. Ronny was preceded in death by his mother, Jeanette Luzum Svec and grandparents, Milo and Margaret Yeck Svec and James and Anna Suda Luzum. He is survived by his father, Major M. Ronald Svec Sr. (USMC Retired) and wife Judy Lloyd-Svec, sister Debbie Adams (Bob), brothers Jim Svec and Bob Svec (Cindy). Nieces and nephews, Christopher Svec, Amy Cook (Chris), Libbie Glick (Adam), Taylor Kaunley (Jared) and Kristen Hildebrand (Dr. Greg Hildebrand). Grand Nephews Owen and Lucas Cook and Weston Kaunley.

A Graveside Committal of Ashes will take place for Ronny on Saturday, October 23, 2021 at 10:30 a.m. at Bohemian National Cemetery in Milligan, Nebraska. Fr. Rand Langhorst will preside over the Graveside. The Milligan Sons of the American... View Obituary & Service Information

The family of M. Ronny Svec Jr. created this Life Tributes page to make it easy to share your memories.

A Graveside Committal of Ashes will take place for Ronny on Saturday,...

Send flowers to the Svec family.